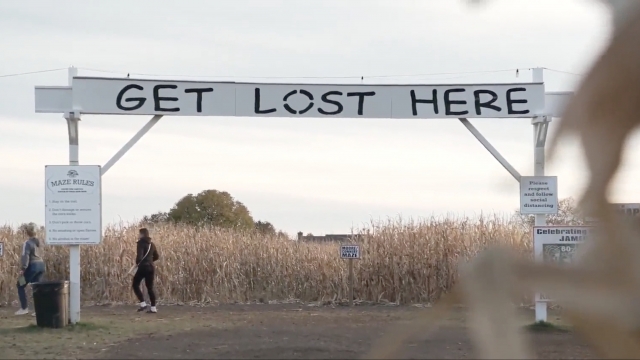 SMS
Record-Breaking Corn Maze Attracts Visitors Looking To Get Lost
By Ben Schamisso
By Ben Schamisso
November 2, 2022
Spooky season may be over, but autumn is still in full swing, making it the perfect time to visit Illinois' record-breaking corn maze.

The goal of Richardson Adventure Farm's corn maze is to get lost — at least for a little while.

Kids, adults and even dogs come in droves every fall, hoping they'll eventually get out.

"It's kind of a way to test your intuition almost," visitor Jorey Henderson said.

Spanning more than 28 acres and featuring 10 miles of trails, the Illinois corn maze proclaims to be the world's largest. This year alone, it attracted over 100,000 visitors from September through October.

"I just love it," co-owner George Richardson said. "People are having so much fun."

Richardson is a fifth-generation family farmer.

"Inside the corn maze itself, there's a number of games — the biggest game being finding all of the checkpoints," Richardson said.

For decades, Richardson and his brothers mostly raised pigs. Then, the market collapsed in the late 1990s. To survive, they decided to try something new.

"We like talking with people," Richardson said. "We like seeing them come to our farm to have fun, and that's when we thought, 'Let's try a corn maze.' It was kind of a new idea in 2001."

They've even had a few scares. 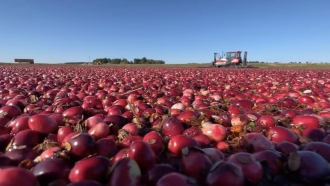 Cranberries Are Ready For Harvest In The Cheesehead State

"There was one year when a person who had imbibed a little too much was at the back of the maze," Richardson said. "He decided to go into the cornfield, lay down and sleep, and it took us about an hour to find him."

From up close, the endless zigzagging trails may appear random. But from high above, the labyrinth cut through the cornfield makes up an impressive image, celebrating the 60th anniversary of James Bond.

The intricate design is made using a corn planter tractor fitted with a GPS and autosteer.

Every year, a creative designer comes up with a new picture.

"Everybody remembers a 2013 maze where we celebrated the first song The Beatles recorded, 'Love Me Do,'" Richardson said.

For thrill-seekers who pay the cover charge of $18, the maze remains open after dark.

"I think it's the mystery of the darkness," visitor Lexi Farrey said. "We can't really see where the paths are."

"If you've ever seen the movie 'Signs,' I wouldn't want it to be like that, maybe with the aliens," visitor Stacy Sroka said. "You're just completely surrounded by corn. You're in the farmland in the middle of kind of nowhere."

But even if a visitor gets lost, don't worry. Richardson and his security team say they'll come get the lost ones before they close for the night.