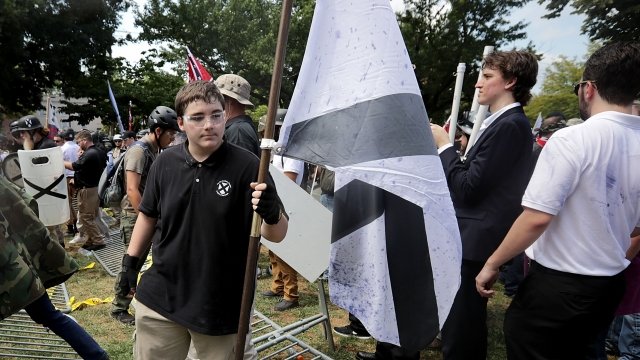 SMS
The Many Symbols Of The Modern White Power Movement

By Matt Picht
August 14, 2017
White power protests feature a panoply of signs and symbols — some of which can be pretty obscure.
SHOW TRANSCRIPT

But since those symbols have so much historical baggage, modern far-right movements are adopting new images to rally around. Here's a quick rundown of some less familiar white power symbols that are coming to the fore.

First up, the neo-Confederate flag: no stars, just bars. The black-and-white cross is meant to be a more subtle version of the widely-known Confederate battle flag.

It's often associated with an extremist group that preaches modern-day Southern secession and the creation of a white state.

A number of far-right logos incorporate the fasces, a bundle of rods with an ax head at the top. It's an ancient Roman symbol of power and authority, and it's still used in some places today — even in the House of Representatives. 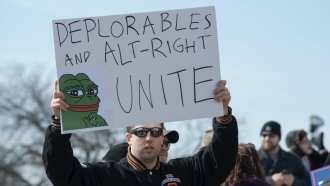 But it was also the symbol of Benito Mussolini and Italy's fascist government. It's now been adopted by some groups that think Mussolini might have had the right idea.

The Black Sun, or sonnenrad, is another ancient symbol that initially represented occult power in Germanic paganism.

The symbol can be found inlaid in the floor of Wewelsburg Castle, which was used by Heinrich Himmler as a "spiritual home" for the SS during the Nazi regime. It's since become an icon for neo-Nazis.

And then there's the Kekistan flag, used by internet trolls and some members of the alt-right. It's deliberately fashioned after the battle flag of Nazi Germany, but the cross and swastika are replaced with the word "kek" and the four-leaf clover of notorious internet forum 4chan.

The far-right has adopted plenty of other symbols and variations — some of them represent different ideologies, others are just re-branding old ones. But when it comes to pushing back on these movements, counter-protesters tend to rely on the classics.