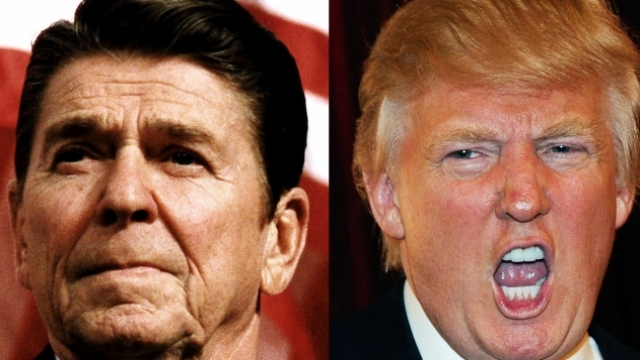 SMS
Reagan 2016: Newspaper Endorses 'The Great Communicator' Over Trump
By Briana Koeneman
By Briana Koeneman
June 3, 2016
The San Diego Union-Tribune says it can't back presumptive GOP presidential nominee Donald Trump, so it wants you to vote for Ronald Reagan instead.
SHOW TRANSCRIPT

The San Diego Union-Tribune has finally decided which Republican candidate it's going to endorse in the race for the White House.

The California newspaper's editorial board said in an op-ed Thursday it cannot back presumptive GOP presidential nominee Donald Trump because he is "unfit to lead the free world."

So, instead, the Union-Tribune wants readers to vote for Reagan, who died in 2004 at the age of 93.

The op-ed reads, in part, "Today, the principles of the party of Ronald Reagan are as relevant as ever: a stable border, a strong military and economic policy focused on low taxes, less bureaucracy and limited regulation."

"I will build a great, great wall on our southern border. And I will have Mexico pay for that wall," Trump said as he announced his bid for president.

Still, some argue that Trump's campaign has a lot more in common with Reagan than some might care to admit.

As a writer for New York Magazine put it earlier this week, "As Reagan seduced voters and confounded the experts with his promise of Morning in America, we can't entirely rule out the possibility that Trump might do the same with his stark, black-and-white entreaties to High Noon."

Trump officially snagged enough delegates to clinch the Republican presidential nomination late last month, though he won't formally accept until the delegates cast their votes at the party's national convention in July.

As for The San Diego Union-Tribune's actual endorsement? The paper has decided to go with Democratic front-runner Hillary Clinton.

This video includes clips from The White House, Donald J. Trump for President Inc., The Ronald Reagan Presidential Library, Fox News and Hillary for America and images from Getty Images.