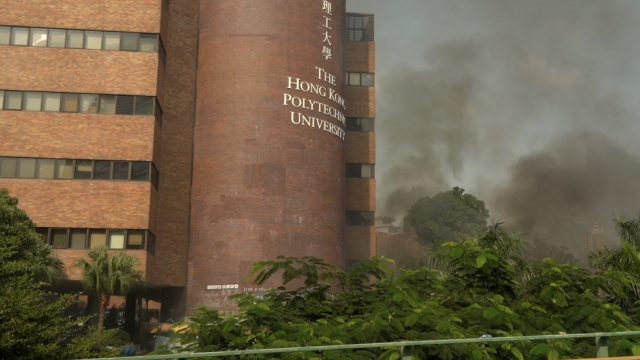 Hong Kong Polytechnic University was turned into a fortified camp last week when demonstrators barricaded themselves in amid battles with police.

It’s been over five months since protests began in Hong Kong, and demonstrators are still sticking to their five demands. In the latest scenes of Hong Kong’s unrest, protesters and police have been battling at universities leaving many concerned for the students' safety.

Mr. Chow, a protester: "We want to save the kids, the students in Polytechnic. They are young kids, but the government is very violent. That’s all: Save the kids is my purpose."

Tom, a student: "Our university is under attack and the tear gas [is] everywhere."

Hong Kong Polytechnic University was turned into a heavily fortified camp last week when demonstrators, including high school and college students, barricaded themselves in, making bombs and shields amid battles with police.

But police say over 1,000 people have already been arrested and charged with things like possessing an offensive weapon and rioting. Authorities ordered protesters to surrender, and hundreds did, many of them sick or injured. Protesters who tried to avoid police while fleeing the campus have been met with rubber bullets, water cannons and tear gas.

Isaac: "Someone called the protester to leave because the tear gas of the police nowadays are using to the protester from main China, which is very toxic."

Tom: "The environment is becoming bad and we can't study here because of the tear gas. ... The materials in the tear gas will make us … it will cause health problems, so we need to protect our university."

Hong Kong's Chief Executive Carrie Lam has urged protesters to leave the campus peacefully, but warned that police will take "necessary action" if they refuse. She said she is shocked campuses have been turned into "weapon factories."

Mr. Chow: "They are not equal because the students use their violence for protecting themselves, otherwise the police use the guns to shoot them. It is totally different level. Someone said that maybe exchange the weapons. OK, exchange them and they will know it is not the same level."

Still, some protesters want to stay.

Tom: "I'm afraid our [unintelligible] is not strong enough to defend [against] the police force because I'm still afraid of how the police will come in to shoot tear gas. So, I think it would be a serious problem for our students' safety."

Isaac: "I just know that the police are going to attack here, and I just come back and many of them are just like me. And then they come back which we want to protect the university."

Protests began over a proposed extradition bill, which has since been formally withdrawn. But the people of Hong Kong are not satisfied.

Isaac: "Polytechnic university is near to the tunnel, which is the one of the major tunnels from Hong Kong island to Kowloon, and then it is very important for the city. So we, the protester, we would like to maybe just say stop the society from working so to force the government to accept our five demands, which we think that five demands and not one less."

Isaac: "I think we can overcome all this division. We are facing, very strong power, which is the communist government of China, and then everyone's afraid. I’m afraid, too, but we just like for the good of Hong Kong."