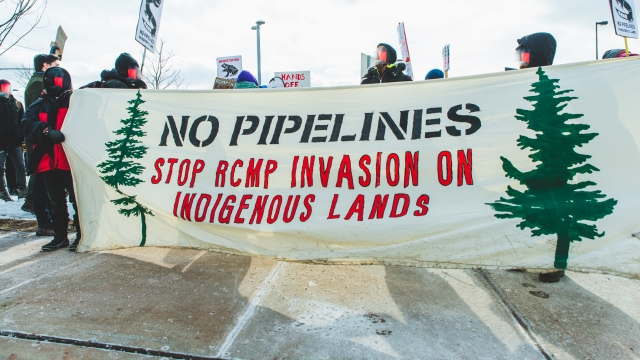 The RCMP said officers would leave Wet'suwet'en territory if the road remained clear. The offer follows two weeks of protests that have blocked construction of the Coastal GasLink pipeline through hundreds of miles of their land.

On Thursday, Canadian officials welcomed the RCMP's offer as a "significant" step toward a "more peaceable arrangement" that would end the blockade, which began earlier this month.

Last year, the British Columbia Supreme Court granted an injunction to Coastal GasLink that banned any interference with the multibillion-dollar project. But in January, Wet'suwet'en leaders informed the company it was trespassing on First Nations land.

British Columbia's government tried to mediate the dispute, but talks broke down after a few days. Protesters began blocking the service route. The RCMP moved in to enforce the injunction and arrested demonstrators.

The arrests triggered solidarity protests across Canada, as well as a nationwide shutdown of commuter rail services. Canadian Prime Minister Justin Trudeau has said the government's working toward finding a negotiated solution that would benefit all parties.

Trudeau said: "You remind us, rightly so, that too often, trust has been betrayed in the history of Indigenous negotiations with Canadian governments. In fact, that underlies the difficulty of solving this situation today. But our common ground is the desire to arrive at solutions. We cannot resolve this alone."

Opposition to the Coastal GasLink pipeline reportedly dates back to 2012, but it does maintain support from 20 elected First Nations band councils along the route. However, Wet'suwet'en hereditary chiefs say construction cannot proceed without their consent.