Razzie Nominations Are In, 'Grown Ups 2' Worst Of Worst 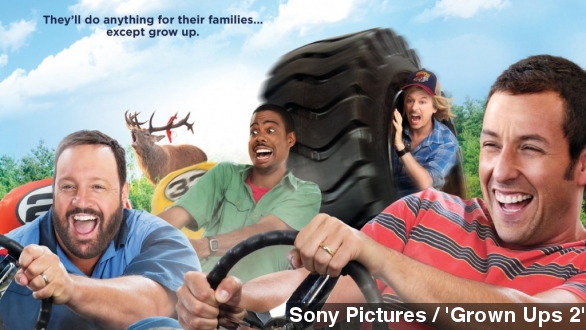 SMS
Razzie Nominations Are In, 'Grown Ups 2' Worst Of Worst

By Jasmine Bailey
January 15, 2014
The Razzie noms for 2013's worst cinematic performances are in. Adam Sandler, Halle Berry, Johnny Depp and Sylvester Stallone are among those tapped.
SHOW TRANSCRIPT

It's awards season, and the 34th annual Golden Raspberry awards, or Razzie, nominations are in for the worst cinematic performances of 2013. But are they really much of a surprise? We'll start with this and let you decide.

"Grown Ups 2" got a 7 percent rating on Rotten Tomatoes, so it seems like it was kind of asking for a Razzie — or eight.

The movie is the frontrunner in the awards filmmakers don't want to win, as it's nominated for worst picture, worst actor, worst supporting actress and actor, worst director, worst screenplay and worst remake, rip-off or sequel. Man. (Via Sony Pictures / "Grown Ups 2")

If Adam Sandler "wins," or more like loses, this would be his third worst-actor Razzie award. He took home one for "That's My Boy" and "Jack and Jill," which Sandler got worst actress for as well — not to mention that film took home awards in every single other category.

Although the eight noms will likely get "Grown Ups 2" at least one of those $5 Raspberries, there are others that some might consider good contenders. (Via E!)

"The Lone Ranger,""A Madea Christmas," "After Earth," and "Movie 43" — which earned only a 4 percent ranking on Rotten Tomatoes — all those stand next to "Grown Ups 2" for the worst movie category, the top prize and biggest, well, dishonor. (Via Rotten Tomatoes)

And the Razzies ​definitely aren't going soft on the newcomers or the veterans.

Will Smith and his adorable son, Jaden Smith, also got noms for "After Earth," but at least they're in it together. Just the two of us, right? Sweet, in a twisted way. (Via Columbia Records / Will Smith)

Halle Berry is also on the list for worst actress in both "Movie 43" and "The Call." Just a hunch, she probably won't be too happy. Here's what happened last time she took home a Razzie.

"So as you can imagine, I want to f***ing slap the s*** out of these Razzie people, but I won't do that. I'll do what my mother taught me ... take it as a lesson learned, and I hope to God I never have to see these people again." (Via YouTube / razziechannel)

We'll find out who will grace the Razzie stage and get their "you kind of sucked" awards March 1, the day before the Oscars.