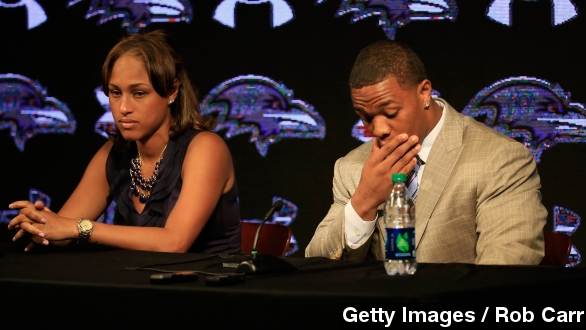 By Briana Koeneman
September 9, 2014
Ray Rice's wife has broken her silence about her husband's football ban in an emotional message posted to her private Instagram account.
SHOW TRANSCRIPT

The wife of former Baltimore Ravens running back Ray Rice has commented on her husband's ban from football.

"I woke up this morning feeling like I had a horrible nightmare. ... No one knows the pain that [the] media & unwanted [opinions] from the public has caused my family. ... To take something away from the man I love that he has worked his ass [off] for all his life just to gain ratings is horrific."

Janay's emotional post comes just one day after Ray's contract with the Ravens was terminated and he was indefinitely suspended from the NFL.

This, after TMZ posted a video that seems to show Ray punching Janay in an elevator earlier this year at the Revel Casino Hotel in Atlantic City. We've chosen not to show the footage due to its graphic nature.

Sources connected with the hotel told the outlet no one from the NFL had asked for the video of the couple in the elevator from the Feb. 15 incident. (Video via ESPN)

Instead, the league and the Ravens reportedly relied on another video released months ago. It was taken from outside that same elevator — and appears to show Ray dragging a seemingly unconscious Janay, who was his fiancee at the time, across the floor.

RAVENS COACH JOHN HARBAUGH VIA FOX NEWS: "I don't know why that would be a hard thing to understand. It wasn't made available. It wasn't there for us. It wasn't something that we ever saw or had access to."

Ray has since apologized for the incident.

But after the release of her Instagram message, many said they were shocked and confused that Janay has chosen to stay by Ray's side.

But Janay has been receiving an outpouring of support, especially on Twitter under the hashtag #WhyIStayed, where users are sharing their own personal stories about why they stayed in an abusive relationship.

As these tweets point out, there are many reasons why people who have experienced domestic violence sometimes stay in the relationship.

According to the National Coalition Against Domestic Violence, those reasons often fall into three categories — lack of resources, reaction from services and authorities and traditional thinking.

NATIONAL DOMESTIC VIOLENCE HOTLINE PRESIDENT KATIE RAY-JONES VIA CNN: "With Janay and with most victims across the country, there is a real sense of fear in the relationship. Additionally, most victims feel a level of blame for what's going on."

And many observers feel the release of that graphic video is much more damaging to Janay than people realize.

The Nation's Dave Zirin put it this way: "Just as we would protect the name of an alleged rape victim ... we should not be showing this video like it's another episode of Rich People Behaving Badly. ... Showing and reshowing it just because we can is an act of harm."

In previous appearances together, the Rices have said that they are continuing "to work through it together." Ray is currently suspended from the NFL indefinitely.