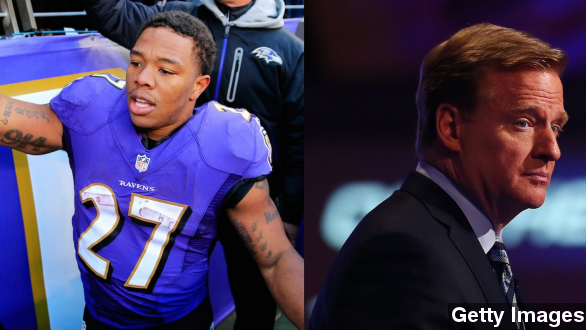 By Christian Bryant
July 24, 2014
The NFL's two-game suspension for Ray Rice after he allegedly assaulted his wife have some in the media questioning the league's lopsided punishments.
SHOW TRANSCRIPT

​Baltimore Ravens and NFL fans knew that running back Ray Rice would be suspended at the beginning of the 2014 season. Rice is charged with assaulting his wife at a New Jersey Casino in February — an incident that was captured on video. (Via Getty Images, TMZ)

But Rice's suspension was much more lenient than most expected. The NFL and Commissioner Roger Goodell suspended the 27-year-old running back for just two games, which led to total bedlam on the Internet.

For some background, the NFL's personal conduct policy is pretty clear on how players should and shouldn't act. Criminal offenses, substance abuse and possession of a firearm in the workplace are all punishable under the policy. What isn't as clear is the relationship between the crime and the punishment.

According to SB Nation, 10 players have been suspended so far this year. As you can see, nine of those 10 players were suspended anywhere from four games to a whole year for substance abuse — like smoking weed — and using performance enhancing drugs, or PEDs.

Many in the media have raised their digital pitchforks following Rice's two-game sentence. ESPN's Robert Flores tweeted, "It's a good thing Ray Rice didn't hit his fiancé with the crown of his helmet," referring to the NFL's rule against players using the top of their helmets when making hits.

That last bit refers to former Dolphins lineman Richie Incognito, who faced an indefinite suspension following a "bullying scandal" in which he was alleged to have hurled slurs and foul language at his former teammate Jonathan Martin. (Via Fox Sports)

Considering Rice's punishment for allegedly knocking his wife unconscious, does the NFL have a suspension problem? The short answer: yes.

Beyond that, at least a few writers believe the NFL has a domestic violence problem. A writer at ESPN W says Rice's punishment is "about as meaningful as a yellow card in a soccer game. ... If the NFL wants to show women it cares, growing a spine on domestic violence would send a louder message than pink cleats in October for Breast Cancer Awareness Month." (Via SB Nation, Fox Sports)

Sports Illustrated pointed out that this was Rice's first offense and it seems the more infractions a player gets, the heavier the penalty. But he adds, "This rather sickening situation offered Goodell an opportunity to put his foot down on domestic violence. ... He failed badly."

Despite the sports media's diagnosis on an ailing punishment system at the NFL, we're still left without an explanation from Goodell. And there's no telling if we'll ever get one.

As for Rice, he has reportedly entered a pretrial intervention program. If he completes that, he can avoid jail time and have the assault charge scrubbed from his record. His two-game suspension goes into affect Aug. 30. (Via Getty Images)