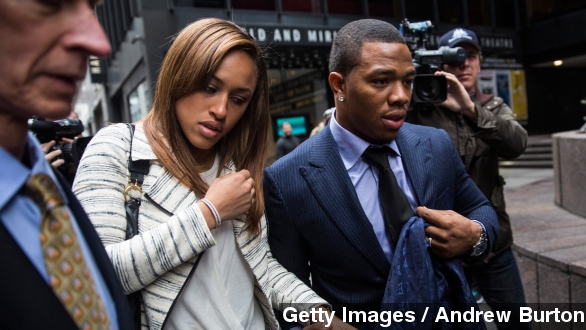 A former federal judge has overturned ex-Baltimore Ravens running back Ray Rice's indefinite suspension from the NFL Friday, clearing the way for Rice to be reinstated into the league.

The former judge, acting as an arbitrator for the legal proceedings between Rice and the NFL, found that the league unfairly punished Rice twice for the February incident in which he hit his wife and knocked her unconscious in an Atlantic City casino. NFL Commissioner Roger Goodell initially suspended Rice two games and fined him $500,000. But after a second, more incriminating video surfaced, Goodell suspended Rice indefinitely.

A New York Times writer frames the decision as a defeat for the NFL and Goodell, who has been taken to task for so-called missteps in his handling of Rice's case, other lopsided player suspensions and the league's personal conduct policy.

Rice is now eligible for reinstatement, but that doesn't mean he'll be hitting the field Sunday. Rice still has to find a team willing to sign him.

Rice is a three-time Pro Bowler and helped lift the Ravens to a Super Bowl XLVII (47) win over the San Francisco 49ers. But he hasn't played this season and his yards per carry in 2013 dropped off from the previous two seasons.

And, of course, there's the bad publicity from the incident with his wife. But there are vacancies in the league.

"There are a couple of teams that have injury problems at running back, or at least issues at running back, that Ray could fill. The questions is would they be willing to do that with Ray Rice," ESPN analyst John Clayton said.

Also Friday, Rice's wife, Janay, opened up to ESPN's Jemele Hill about what happened that fateful night in February and everything that's happened since. If you'd like to dive in, head over to ESPN.com.

Although Rice's chances of finding a new home in the NFL are up in the air, he said in a statement after the ruling he will continue working to be "the best husband, father and friend, while giving back to [his] community and helping others to learn from [his] mistakes."