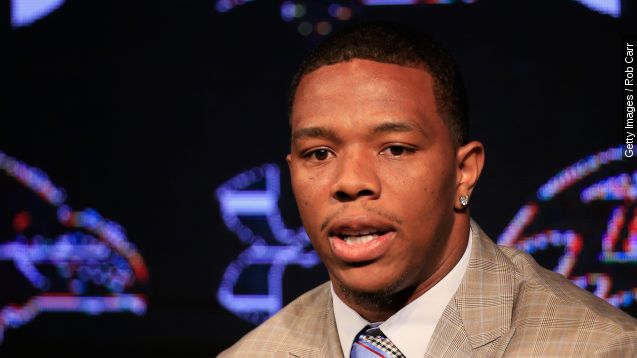 SMS
Ray Rice Lobbies For NFL Return; What's The Holdup?
By Matt Moreno
By Matt Moreno
August 6, 2015
Rice is eligible to sign with NFL teams, but no one has taken a chance on him yet. The former Ravens RB spoke out on ESPN earlier in the week.
SHOW TRANSCRIPT

Former Baltimore Ravens running back Ray Rice is focused on returning to the NFL and is trying to say all the right things in his pursuit.

"We do live in a society where public opinion matters and I totally respect that, and domestic violence is real. It happens every 12 seconds. ...  To the survivors of domestic violence, I understand how real it is," Rice told ESPN.

Adrian Peterson and Greg Hardy were also suspended last season for domestic violence incidents. Both have largely veered away from media interviews since, but Rice's ESPN interview with Jemele Hill marks the second time he's addressed the media.

"I had one bad night and I took full responsibility for it," Rice told NBC in December 2014.

Rice was released from the Ravens and suspended from the NFL after he was indicted for assaulting his then-fiancée.

In this latest interview, Rice called himself a "rehabilitated man" and referred to NFL commissioner Roger Goodell, the man who issued his suspension, as a "great commissioner."

Rice is clearly trying to get ahead of the public-relations mess that would greet him if any team takes a chance on signing him. But is it working?

USA Today's Christine Brennan says yes. "Back comes Peterson, and, four weeks later, Hardy, too. As for Rice, he should get to join them this fall, if only so we can listen to what he has to say."

A Forbes contributor says otherwise. "He surely wants to be given another chance, and he might deserve one. That likely won't matter to teams that now fully understand that Rice's past will continue to be the main topic should he land a job."

Reactions on Twitter were just as scattered, with some buying into Rice's words and others brushing them off.

So not great, but certainly a better view of him than where things were a year ago.

Rice is still a free agent after being released by the Baltimore Ravens last season. That could change, though, as the dog days of NFL training camps continue and teams' plans change due to injuries.

If Rice does sign with a team this year, expect its public relations department to already be very experienced — or at least ready to gain a lot of it.