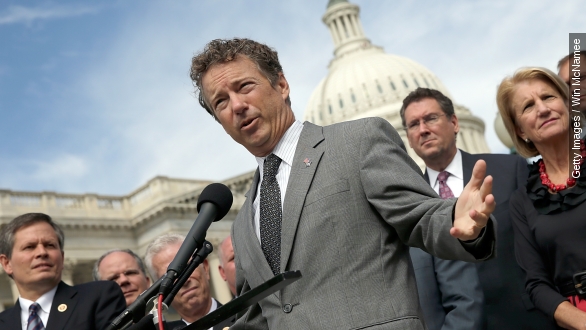 Rand Paul has had to learn the hard way that you can't force "cool." More importantly, you can't plaster your political logo on a company's product and sell it on your website without permission.

Paul has had to pull a pair of "Rand"-branded Ray-Ban sunglasses from his campaign website after the company sent a cease-and-desist letter. The $150 shades were meant to raise money for Paul's presidential campaign and were described as the "intersection of politics and cool." (Video via Rand Paul)

The Kentucky senator is definitely trying to be the cool candidate. Check out this video of him on the Senate floor casually flicking his shades open before going for a congressional fist bump with Senate Minority Leader Harry Reid.

Then there are other — we'll say "interesting" — items on his website. There are the more tame Beats headphone skins but also an "NSA Spy Cam Blocker" and even "Hilary's Hard Drive," marketed as a "100% genuine erased clean email server," a play on his Democratic rival's recent scandal over her email use while she was Secretary of State.

Paul has gone out of his way to appeal to younger voters. He made an appearance at South by Southwest and even started a Snapchat account.

"I believe you have a right to privacy and it should be protected," Paul said in a campaign video.

Paul says his stance on issues like the National Security Agency's surveillance programs will help pull younger voters over to the GOP.

That isn't to say he's already won the youth demographic. A January poll of Republicans aged 18 to 34 conducted by Fusion had him coming in second— behind Jeb Bush.