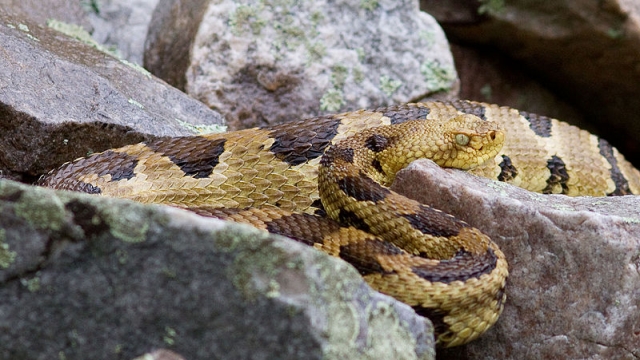 SMS
Rattlesnake Island: Mass. Officials Are Planning A Snake Colony
By Matt Moreno
By Matt Moreno
February 22, 2016
Officials at the Massachusetts Division of Fisheries and Wildlife are trying to preserve the species after recent sharp declines.
SHOW TRANSCRIPT

Imagine an island crawling with these guys.

Well, if Massachusetts officials get their way, a nightmarish-sounding "rattlesnake island" could become a reality.

Massachusetts Division of Fisheries and Wildlife officials want to make Mount Zion, an island off-limits to the public and part of the Quabbin Reservoir, into a habitat for venomous timber rattlesnakes.

Officials hope by doing this, it will help save the species. There are only about 200 of the indigenous snakes left in Massachusetts.

Residents have expressed concerns the snakes could swim across the reservoir and attack hikers or fishermen. Officials say that shouldn't be a concern, though.

The Division of Fisheries and Wildlife website says the snakes are good swimmers, but they can only survive in "unusually deep hibernation sites" like the Quabbin Reservoir. If they escaped, they'd die come winter.

Tom French, one of the officials pushing for the plan, told The Republican there'd be fewer than 10 snakes added to the island a year — a far cry from the 150 all at once reported by multiple outlets.

He said, "It's not going to be like 'Indiana Jones' with rattlesnakes everywhere."

Adult timber rattlesnakes can grow up to 5 feet in length. Officials plan to speak at a public meeting on Tuesday to further address the public's concerns about the proposal.