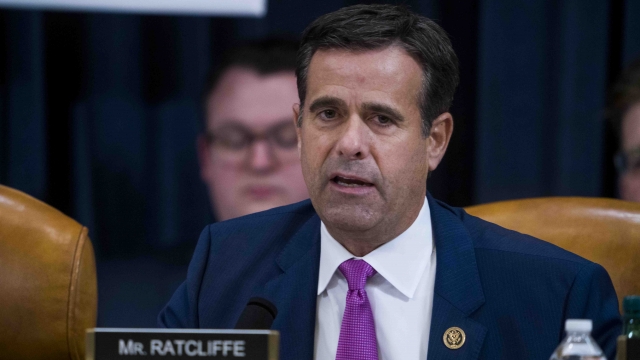 President Donald Trump is nominating U.S. Rep. John Ratcliffe for a second time to be the next director of national intelligence.

The president announced the nomination on Twitter Friday, praising Ratcliffe as "an outstanding man of great talent." He also said he would've "completed [the] process earlier," but that Ratcliffe "wanted to wait until after [the] IG Report was finished."

President Trump nominated Ratcliffe for the position last year after the previous director, Dan Coats, announced he'd be stepping down. But Ratcliffe withdrew from consideration days later amid bipartisan criticism that he was not qualified for the job.

Acting National Intelligence Director Richard Grenell congratulated the congressman on the nomination, but not everyone was happy. Senate Minority Leader Chuck Schumer said in a statement Friday: "At a time when the Russians are interfering in our elections, we need a nonpartisan leader at the helm of the Intelligence Community who sees the world objectively and speaks truth to power, and unfortunately neither Acting Director Grenell nor Rep. Ratcliffe comes even close to that." Schumer said the president's pick shows a "lack of respect for the rule of law and the intelligence community", and he urged both Republicans and Democrats to reject the nomination.