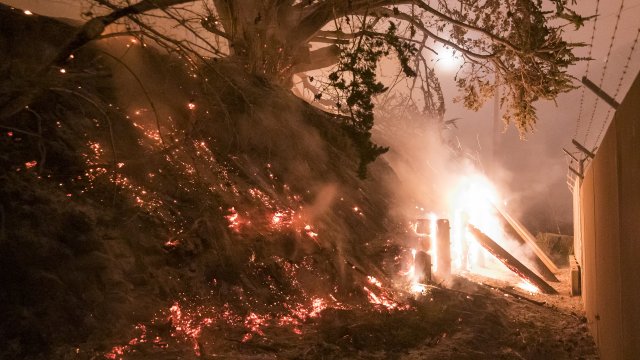 Cal Fire says the cause of the blaze is still under investigation.

This is not fire season, but a rare January wildfire is now roaring near the central California coastline.

Some strong Santa Ana winds over the weekend whipped up the fire.

Crews from across California were battling the blaze Monday morning near Big Sur — south of San Francisco along the Pacific coast.

So far it's burned several hundred acres. Scenic Highway 1, which runs along the coast, was forced to close in both directions.

The strong winds fanned the flames over the weekend, but they're dying down.

Santa Ana winds start in Utah and Nevada due to a high pressure system there and head toward the low pressure system off the coast of California. Along the way, they head up over the mountains, then rush down the other side.

The winds are channeled into canyons where they pick up speed as they head toward the ocean, which can cause a fire to quickly build up.

Some of the wind gusts clocked in at close to 80 miles per hour.

Cal Fire says the cause of the blaze is still under investigation.