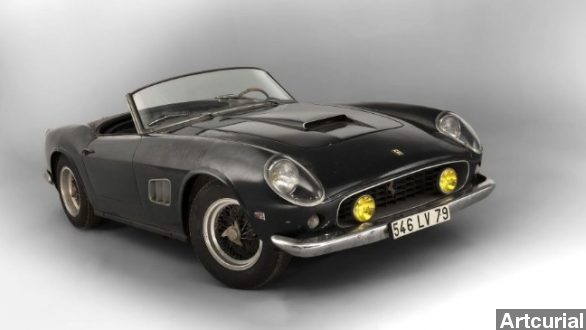 SMS
Rare Ferrari Sells For $18.5 Million At French Auction
By Katherine Biek
By Katherine Biek
February 10, 2015
A 1961 Ferrari 250 GT SWB California Spider was discovered in a barn a few months ago. It just sold for $18.5 million at auction.
SHOW TRANSCRIPT

An incredibly rare car just sold at a Paris auction for $18.5 million.

It was a 1961 Ferrari 250 GT SWB California Spider with covered headlights. There are fewer than 40 in existence.

The classic car was discovered with 59 others in a barn in France back in September. Most of the cars were weathered from the elements, but the Ferrari had been placed deep inside the barn, so it was well-preserved.

The car once belonged to French actor Alain Delon.

It was eventually sold and ended up in the hands of a French businessman named Roger Baillon, who added it to his massive collection of cars. He dreamed of creating a car museum, but it never came to fruition after his business went bankrupt.

The auction house's motor car specialist told The Telegraph: "The California is a very important car because it was unknown. Some people knew a rare Ferrari existed, but no one knew it was a California."

The $18.5 million price the Ferrari went for is the new world-record price paid for that type of car at auction, according to Artcurial.

But this car still didn't beat the price for the most expensive car ever sold at an auction. That honor goes to a 1962-63 Ferrari GTO Berlinetta that sold for $38 million last year.

Also discovered in the barn and sold at Artcurial's auction were a 1956 Maserati that sold for $2.2 million and a 1938 Mercedes Benz that went for $1.6 million.

This video includes images from Artcurial and Getty Images.