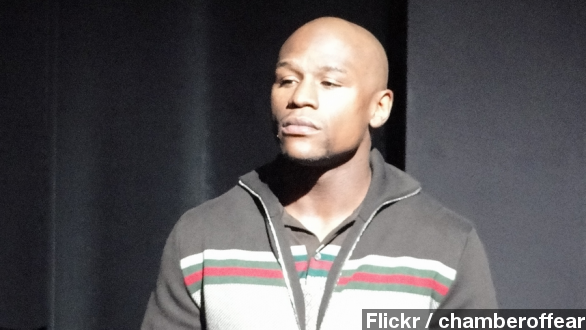 By Lauren Zima
May 26, 2014
The rapper and the boxing champ reportedly got in a fight over Mayweather spending time with T.I.'s wife.
SHOW TRANSCRIPT

Boxing great Floyd Mayweather doesn't seem like someone for the average person to get in a fight with. (Via Flickr / chamberoffear)

OK, not totally average — rapper T.I. and Mayweather apparently fought in Las Vegas over the weekend, and not at a bar or in the boxing ring — at a Fatburger restaurant. Entertainment news site HipHopStan has what it says is video of the incident. (Via New York Daily News, Deadspin)

According to the entertainment news website, the fight started early Sunday morning, and it was over T.I.'s wife, Tameka "Tiny" Cottle, spending time with Mayweather. (Via WMG / T.I.)

According to TMZ, it was T.I. who approached Mayweather at the restaurant and started the fight, and chairs were thrown at one point, with a Fatburger employee getting cut.

Mayweather apparently spoke with blogsite Necole Bitchie about the incident, saying Cottle and her friend wanted to come to his fight. He said he's known her longer than he's known T.I., but they've never been more than friends.

"I guess he [T.I.] was feeling some type of way. ... Only person I want to apologize towards is Tiny." (Via Necole Bitchie)​

"What they say, I got two black eye? Where they at, though?"

T.I. and Tiny have been plagued by divorce rumors in recent months, though she denied them in early May. (Via Reality Tea)

"Well, it's definitely not true." (Via CBS Television Distribution / "The Arsenio Hall Show")

After news of the fight broke, she posted a photo declaring she was doing "nothing wrong." (Via Instagram / majorgirl)