Rapper Reportedly Cuts Off Own Penis, Jumps From Apartment 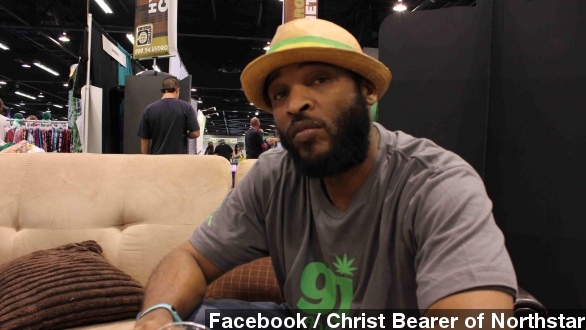 SMS
Rapper Reportedly Cuts Off Own Penis, Jumps From Apartment

By Briana Koeneman
April 17, 2014
Los Angeles rapper Andre Johnson is seriously hurt after he cut off his own penis, then jumped from a second-story apartment, according to police.
SHOW TRANSCRIPT

​A Los Angeles rapper is seriously hurt after suffering some odd and gruesome injuries.

Police told KNBC 40-year-old Andre Johnson cut off his own penis Wednesday before jumping from a second-story apartment and landing on a nearby sidewalk in North Hollywood.

Johnson, who raps under the name Christ Bearer in the hip-hop duo Northstar, was taken to a local hospital shortly after police arrived on the scene. His condition is currently unknown. (Via Nutt Sackular Publishing / Christ Bearer)

Los Angeles Police Sgt. William Mann told the Los Angeles Times investigators aren't sure what caused Johnson to mutilate himself or jump from the apartment.

But several reports claim it was a suicide attempt.

According to TMZ, two members of a group Johnson collaborated with were at the apartment when the incident occurred. They say he did it "without warning" and wasn't under the influence of any hard drugs at the time.

The gruesome incident comes just one day after Johnson posted a new music video with fellow rapper Rugged Monk to Facebook and Twitter.

Johnson's hip-hop group was reportedly discovered by members of the Wu-Tang Clan. His claims to fame include an appearance on the soundtrack for the 2004 movie "Blade: Trinity."