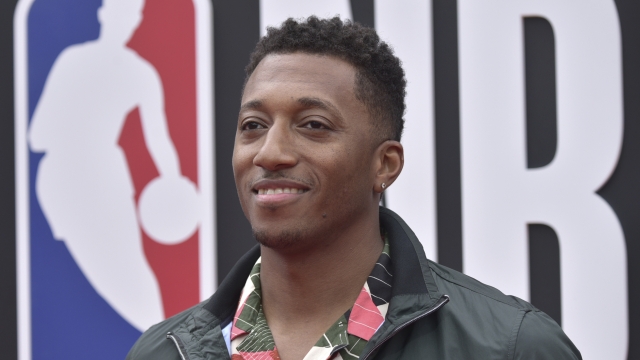 SMS
Rapper Lecrae, Hip-Hop Contestants Bring Hope To Inmates
By Newsy Staff
By Newsy Staff
September 1, 2022
In the latest story in Newsy's American Heart series, participants were asked to compose original song lyrics and a title to one of three beats.

A very special contest spearheaded by Grammy award-winning rapper Lecrae to bring hope to incarcerated people in our country, their families and their communities is the focus of one of Newsy's American Heart series segments. In the series, Newsy looks for and amplifies the best in America.

Participants in this special contest were asked to compose original song lyrics and a title to one of three beats. They got them over technology and then they sat down and they came up with it. The winning track, "I Think" was composed by Carmela Mose, also known as Good, who is currently serving time at the Central California Women's Facility. Her track was chosen from hundreds of submissions around the country. Rapper Lecrae met Carmela to record the song on site with the help of technology company Securus.

You can check out more of my work w. @SecurusTech & Carmela: https://t.co/VWaSIYlAiv & go download the song: https://t.co/1jRhm4OaOq. All proceeds from the song will be donated to @prisonfellowshp pic.twitter.com/fsKDizg0o8

NEWSY TONIGHT'S CHANCE SEALES: Joining me now are two people very intimately involved with this project: Dave Abel is the president and CEO of Securus Technologies and with him, Grammy award-winning artist Lecrae. Lecrae, good to have you. Let's start with you. You're lending your name, passion, followers, your presence to this first-ever original hip-hop track contest. What hooked you about this? What got you excited?

LECRAE: Well, you know, I've been involved with the corrections community for years and Securus gave me the opportunity to kind of broaden my access to people behind those walls and you know, just to be able to deliver hope through music to over half a million incarcerated people was a very fulfilling and important aspect of my life and so it's important to me and my history and my story.

SEALES: Hope. Yeah, I mean, in churches or in the crowds that you play to, I'm sure people are there and they're excited. Hope is not a word generally associated with a penitentiary. That seems like a really unique opportunity.

LECRAE: It is, man. It's a really unique opportunity. The reality is that there are people behind those walls who are family members of folks like you and I. Some have made some mistakes; some may be there for different reasons that are questionable, but at the end of the day, they're still human beings and they have a voice and often times their voice is not heard. So, we're providing them with an opportunity to be heard, to be seen and to participate in an aspect of society that demonstrates that rehabilitation and restoration is possible.

SEALES: Dave, this is kind of a novel idea. Plenty of prisons have reading programs or you can become a paralegal or something of that sort. I know you work with new technology to keep people who are incarcerated connected to the outside world every day. But rap music — Why rap music?

SEALES: Lecrae, the winner of the contest is Carmela Mose, who is 37 years old. She's of Mexican and Samoan descent, I believe. She's serving time in the Central California Women's Facility. There were tons of submissions. It got whittled down to 25, and then she was ultimately chosen. As an artist, as a philanthropist who really cares about not just, you know, prison populations, but the hearts and souls who are there. What spoke to you about her?

LECRAE: Carmela Mose is just a phenomenal person in general. Ms. Mose, a.k.a. Good, which is her rapper name — Good just represents a voice that would otherwise have been silenced. She's talking about things in her lyrics, you know, from the submissions we saw, she was talking about such profound and ingenious things in a creative way that I was like, "Wow, how in the world has this voice not been heard?" And so, to get the opportunity to give her a voice to speak to the world is actually a gift to me.

SEALES: Dave, your company Securus is more of a tech company than it is a music company. Why did you decide, when speaking with your board and speaking with your fellow employees, that "This was something we want to put our resources behind."

ABEL: Our company is focused on being able to get a tablet in the hand of every incarcerated individual in the United States. We deploy technology that helps rehabilitative justice and we were watching all around the industry and it was an absolute no-brainer to work with Lecrae. He has spoken for years, not only in his lyrics, but in his public statements, about the need to reinvest in the community of people who are incarcerated and help to be able to create better outcomes. So, in partnering with Lecrae and being able to use our technology, we felt that it would be a great outcome for those who participated, for those who submitted lyrics and and frankly, being able to provide resources to the Prison Fellowship Program. We thought it would be a great outcome for everybody involved.

SEALES: In the end, I know that this is not something you just came to in the last few weeks or a year, that this is something you've cared about for a long time. If there are themes that you hear, if there are lyrics that speak to you, do you think the broader world should hear? Because we get to hear Carmela, but there are so many more. Anything that you think we need to know as a society?

LECRAE: Yeah, I think that again, you know, I'm the product of somebody who has had family incarcerated, my father being one of them. And you know, when you can humanize folks behind those walls, you also send a message to their children and their family members that they matter as well. And so, giving them a voice on this original hip-hop track contest opens the door for other creative opportunities to showcase the talent and the humanity of people behind it, as well. Often times they're typecast as you know, just anything other than human. And I think this humanizes them and it helps us to see ourselves in them.

SEALES: Dave, Lecrae has talked about the importance of finding an inspiring hope within every population inside and outside prison walls — connectedness. I know people do better when they reenter society when there's a connection, a deep connection and I know you work to keep people connected to the outside. Did that seem to be in the same way wavelength here?

ABEL: Absolutely. And study after study shows that individuals that have greater connection with friends and family outside facilities are much more likely to successfully reenter society after their sentence is complete. And we also find that when individuals are sharing music, when they're sharing stories about songs that they've heard or experiences that they've had with people on the outside, that it creates a connective bond that also aids towards successful reentry.

SEALES: Lecrae, I was reading up on your Prison Fellowship Program and I loved part of the tag line: "working to bring hope and restoration to the incarcerated, their families and communities impacted by crime and incarceration." And what does this world need more than hope right now? I think that's phenomenal. Dave Abel, Lecrae, thank you both for your time and all the work you're putting in.

LECRAE: Thank you. I appreciate you having me.