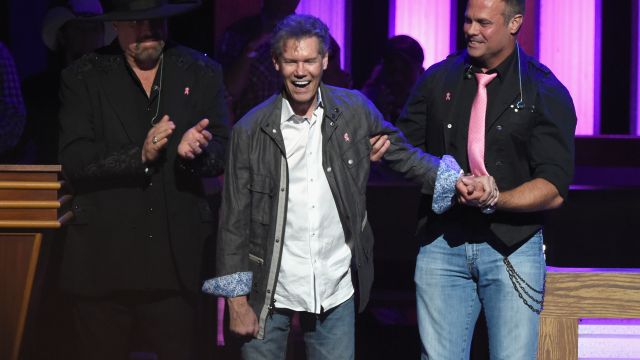 Gainesville police officer Keith Bartlett and his family lost their home in a fire earlier this month.

The community has been helping them put their lives back together after the disaster, and Travis decided to pitch in.

The singer dropped by the police station to surprise Bartlett with an autographed guitar.

Bartlett was lured out of the office with a fake suspicious vehicle call on Christmas Day so Travis and his family could surprise Bartlett. The department posted on Facebook, "The shift got to hang out with Randy for a while, and Keith played a few tunes. What a Christmas at the PD!"

Bartlett was an avid guitar player, and he lost his two instruments in the fire. He told KXII, "At first, you realize everything's gone as a whole, but then you start thinking of the little things. ... We are extremely blessed with everybody helping us ... my sergeant, the whole department, strangers."

The two men had actually met briefly before. Bartlett helped investigate a theft case at the Travis family's ranch in Cooke County.

The History Of The National Christmas Tree

Travis is still recovering from a massive stroke he suffered in 2013. It left him unable to sing or speak. He's gradually started to regain his voice, and he performed a rendition of "Amazing Grace" during his induction into the Country Music Hall of Fame this October.