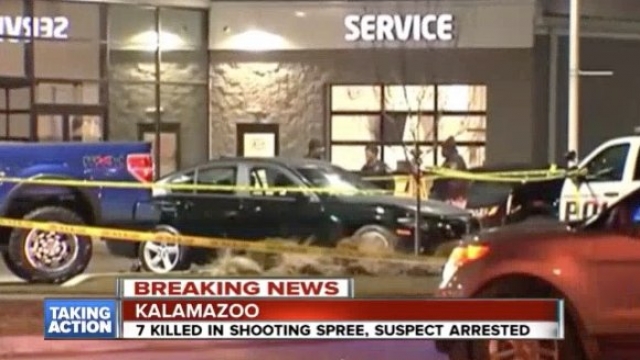 Police have arrested a man they believe shot and killed six people and wounded at least three others in Kalamazoo, Michigan, Saturday night.

Authorities originally put the death toll at seven, but that was later revised. A local prosecutor says a 14-year-old girl reported killed is still alive but gravely wounded.

Officials are calling the shootings random. According to Newsy's partners at WXYZ, 45-year-old Jason Dalton allegedly shot a woman in a townhome parking lot around 6 p.m. local time. Roughly three hours later, three were shot at a car dealership, and about an hour after that, five were shot at a Cracker Barrel restaurant.

Police told WOOD Dalton was an Uber driver and took fares between his attacks. Authorities are investigating reports that he brought three people to a hotel next door to the Cracker Barrel before opening fire there.

Dalton was arrested after a brief car chase with a weapon in his vehicle. Police began searching Dalton's home early Sunday morning.

So far, police have found no motive for the shooting.

This video includes images from the Kalamazoo County Sheriff's Office.