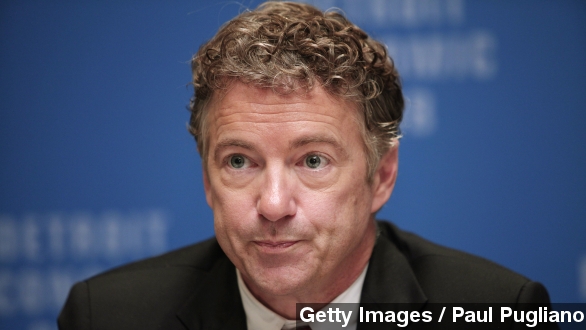 By Zach Toombs
November 24, 2014
The junior U.S. senator from Kentucky wants a formal declaration of war, something the president and Congress haven't passed since World War II.
SHOW TRANSCRIPT

Rand Paul wants a formal declaration of war with ISIS. In a New York Times interview published Monday, the junior Kentucky senator criticized the president for taking action and knocked his own party for not taking issue, saying, "This is another example where [the president] doesn’t have much respect for Congress, and some conservatives don’t quite get that.”

"America will lead a broad coalition to roll back this terrorist threat," President Obama said from the White House.

But that was justified by a 2001 authorization of force against the attackers on 9/11, not through a formal declaration of war.

Congress and the president haven't passed one of those since World War II.

But the argument Paul and others make now is that the U.S. needs a formal debate to show unity and in keeping with the Constitution.

"It's going to last a long time, and we need to know what we're getting into," Eugene Robinson of The Washington Post said on MSNBC.

Paul has asked for a formal debate on the issue before.

"The most deliberative body in the world doesn't have 15 minutes to debate separately a question of war," Sen. Paul said, via C-SPAN.

And after the midterm elections, President Obama indicated he'd be seeking new authorization from Congress for action against ISIS.

"The world needs to know we are united behind this effort, and the men and women in uniform deserve our clear and unified support," he said.

Sen. Paul has offered up a resolution to make a formal declaration but to limit military action to one year and put limits on ground combat.