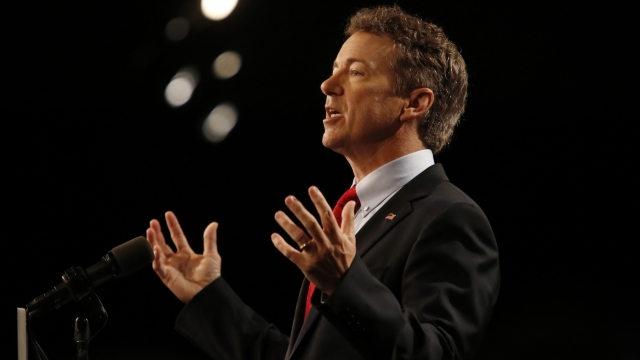 SMS
Rand Paul Gets In The Festivus Mood With Annual 'Airing Of Grievances'
By Grant Suneson
By Grant Suneson
December 23, 2016
Paul revived Festivus, the "Seinfeld"-created tradition of airing one's grievances with friends and co-workers.
SHOW TRANSCRIPT

Sen. Rand Paul got into the holiday spirit, though probably not the holiday you're thinking of.

Paul went full Costanza and aired his grievances on Twitter in honor of Festivus, the "Seinfeld"-created holiday.

Paul griped about Donald Trump, asking who has to tell him he can't turn the White House lawn into a golf course.

He poked fun at some Trump appointments, including incoming Energy Secretary Rick Perry, who forgot the Department of Energy existed.

Paul mocked Linda McMahon and Trump for their past work with pro wrestling, adding, "for those who think WWE is real, I'm very sorry Bernie Sanders lost."

But Paul's main grievance was wasteful government spending. He highlighted a few examples, including the State Department spending more than $1 million on an anti-terrorism cartoon in Pakistan.

This is not a new tradition for Paul. He's been using Twitter to give other politicians a piece of his mind since 2013.

It's always fun to see politicians take a break from politics to have a little fun. We're still waiting on Paul to take on Harry Reid in the Festivus feats of strength like he promised.