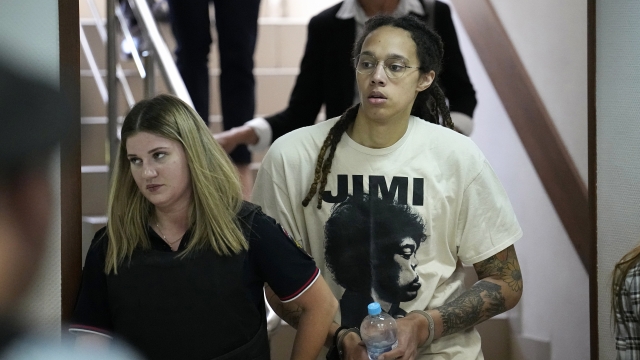 A rally to bring American basketball player Brittney Griner home was held at the Footprint Center in Phoenix, Arizona on Wednesday.

More than 2,000 people signed up to attend and call on government and non-government entities to do everything in their power to immediately and safely bring Griner home.

Griner is a two-time Olympic gold medalist, a WNBA champion and a six-time all-star with the Phoenix Mercury team.

She has just been named an all-star for a seventh time and will be an honorary starter for Sunday’s all-star game in Chicago, Illinois.

The president of Mercury, Vince Kozar, says it’s their responsibility as a league to keep her top of mind and in the headlines.

"What we are telling people today at the rally is to make their voices heard — whether in person, whether that’s to write to elected officials, whether it’s signing change.org petitions," Kozar said. "That’s whats most important that people can do on a daily basis."

Griner’s wife, Cherelle, her head coach and one of her teammates spoke at the rally.

President Biden reassured her that he’s working to secure Brittney’s release as soon as possible and committed to pursuing every avenue to bring her home. He also read Cherelle a draft letter he is sending Brittney.

This meeting came on the heels of a hand-written letter sent by Brittney to the president. Part of the letter was released, reading:

″…as I sit here in a Russian prison, alone with my thoughts and without the protection of my wife, family, friends, Olympic jersey, or any accomplishments — I’m terrified I might be here forever.”

Griner was detained in a Moscow airport back in February, more than 130 days ago.

The White House says Griner is being wrongfully detained in Moscow.

Congressman Greg Stanton, the former mayor of Phoenix, introduced a resolution in Arizona calling on her immediate release.  It was passed by the U.S. House of Representatives earlier this week.

Griner, like many women in basketball, play in Russia during the off-season.

Her supporters have called for a prison swap, which was done to release Trevor Reed earlier this year after two years in a Russian prison.