Across the Country, A Movement Builds Against Anti-Asian Hate 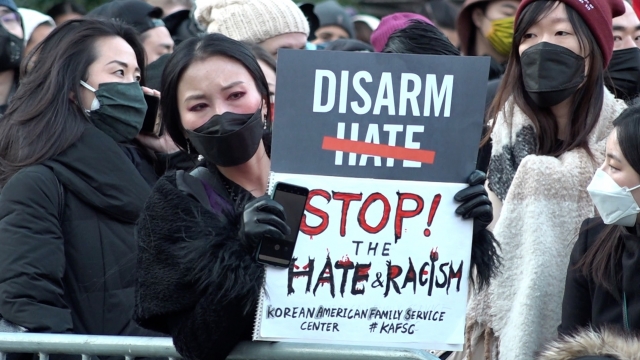 Rallies held in New York, Chicago, San Francisco as advocates push for Atlanta attack to be investigated as a hate crime.

Across the country, from California to New York, hundreds have marched united against anti-Asian hate and held vigils to remember the Atlanta shooting victims.

"The reality is that this could have been me or my sister or my family," says Umi Akiyoshi.

Since the start of the pandemic, the Asian American community has been faced with discrimination and attacks and often blamed for the pandemic. What happened in Atlanta has galvanized people.

"It's hard to go through something like this and just be by yourself," says one of the Asian American vigil attendees.

FBI Director Christopher Wray says the shootings don’t appear to be racially motivated, though the case is still under investigation.

Senator Tammy Duckworth has asked Wray and Attorney General Merrick Garland to look into whether hate crimes against Asian Asian Americans are underreported. On Face The Nation she said, "I wanna see a deeper investigation into whether or not these shootings and other similar crimes are racially motivated. It looks racially motivated to me.

Activists have seen a rise in Asian attacks. Reporting center Stop AAPI Hate recorded nearly 3,800 anti-Asian incidents since the start of the pandemic, 68% of them were women.

President Joe Biden and Vice President Kamala Harris,  whose mother is from India, met with Asian American leaders in Atlanta days after the shooting. They acknowledged the ongoing surge of violence against Asian Americans and took a stand against racism and xenophobia.