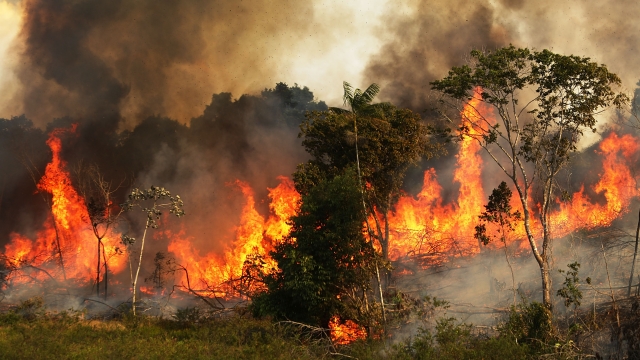 The Amazon rainforest is on fire at a record rate. In fact, there have been more than 72,000 fires alone in the Amazon region of Brazil this year, up 80% from just a year ago.

The number of fires detected by Brazil's space research center is increasing global alarm over the impacts the accelerated forest destruction may have on climate change.

Scientists say the Amazon basin, home to the largest rainforest on the planet, is akin to the planet's lungs. The region produces 20% of the Earth's oxygen.

Now heavy smoke and ash from fires is choking skies, spanning more than 1,700 miles. The expanse, in red and yellow, is captured here in this map from the European Union's satellite program, Copernicus.

Fire has long been an issue in the Amazon basin, from both naturally occurring events and, frequently, deliberately set blazes for land clearing.

Alberto Setzer, a researcher for Brazil's space agency, says the Amazon region is below average in rainfall but isn't in a severe drought year. He says, “The dry season creates the favorable conditions for the use and spread of fire, but starting a fire is the work of humans, either deliberately or by accident."

And that has environmentalists pointing the finger at Brazil's right-wing president Jair Bolsonaro and his embrace of deforestation for mining, ranching and other economic development.

Greenpeace has labeled Bolsonaro as "a threat to the climate equilibrium." But the president scoffed, saying: "I used to be called Captain Chainsaw. Now I am Nero, setting the Amazon aflame." He's now accusing environmental groups of setting fires in an attempt to hurt his administration.

Activists and pro-environment organizations have issued a stark warning. They say if the rainforest keeps getting destroyed at this rate, it will stop being a principal source of oxygen. Instead, it will emit more carbon, the major cause of climate change.