Rainbow Flag Takes On Additional Meaning For Gays Against Guns 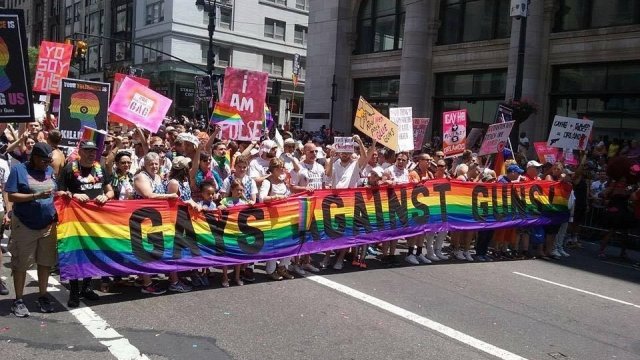 SMS
Rainbow Flag Takes On Additional Meaning For Gays Against Guns
By Cody LaGrow
By Cody LaGrow
June 26, 2018
The Orlando organization began speaking out against gun violence after the shooting at Pulse Nightclub, an event that claimed the lives of 49 people.
SHOW TRANSCRIPT

The rainbow flag celebrated its 40th anniversary in 2018 — and what the flag stands for has evolved over nearly half a century.

David Moran, a leader of Gays Against Guns – Orlando, carries a 40-foot rainbow banner to shed light on gun violence. Moran lost two friends in the Pulse nightclub shooting in Orlando on June 12, 2016.

His banner was created and autographed by Gilbert Baker — the creator of the original rainbow flag.

"I think it represents opportunity — opportunity to be inclusive, and to change things and to be visible," said Moran.

The flag now consists of the six traditional colors of the rainbow, each with its own meaning.

Baker died in 2017 after making the banner for Gays Against Guns. Moran hopes Baker's legacy lives on through his banner and it continues to be a symbol of inclusion and solidarity.