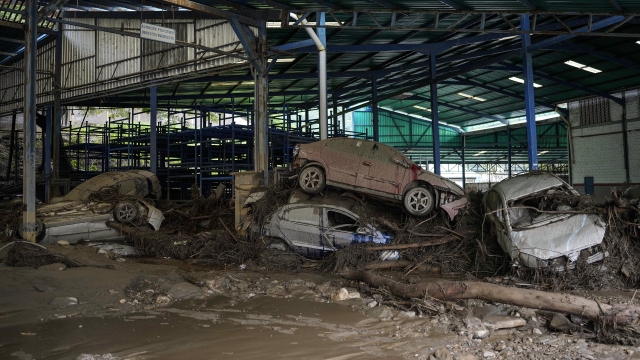 Rescuers were carrying out search operations with trained dogs and drones as dozens of people remained missing after the landslide.

A landslide fueled by flooding and days of torrential rain swept through a town in central Venezuela, leaving at least 22 people dead as it dragged mud, rocks and trees through neighborhoods, authorities said Sunday. Dozens of people are missing.

Residents of Las Tejerías in Santos Michelena, an agro-industrial town in Aragua state 54 miles southwest of Caracas, had just seconds to reach safety late Saturday as debris swept down a mountainside onto them.

"There was a large landslide in the central area of Las Tejerías" where five streams overflowed, she said from the scene of the disaster. "We have already found 22 dead people; there are more than 52 missing."

She said shelters will be set up for people who lost their homes.

Higher on the mountainside, most of the houses were swept away, including  those of a group of Evangelicals who were praying when the landslide hit, said homemaker Carmen Teresa Chirinos, a resident of Las Tejerías. Families in tears hugged in front of destroyed homes and businesses.

"There are a lot of people missing," Chirinos said.

Hours earlier, Major Gen. Carlos Pérez Ampueda, the vice minister for risk management and civil protection, had said via Twitter that several people were reported missing in the El Béisbol and La Agotada neighborhoods in the north of the town. Dozens of homes were damaged by the landslide.

"So many families lost their houses and I, as a businessman, lost my pizzeria," said Luis Fuentes, who opened his pizza restaurant two years ago. "Look, I have nothing."

Aragua Gov. Karina Carpio said the floodwaters "terribly affected" 21 sectors in Las Tejerías, capital of the Santos Michelena municipality, which has some 54,000 inhabitants.

During the past week, torrential rains have caused flooding in 11 of Venezuela's 23 states.

President Nicolás Maduro said 20,000 officials, including rescuers and members of security forces, have been deployed to affected regions.

Thousands of villagers have been evacuated from the typhoon's path, as well as from mountainside villages prone to landslides and flash floods.