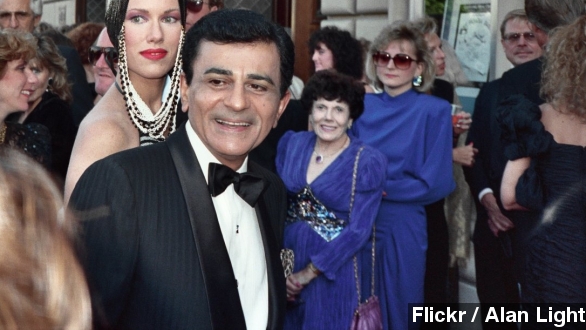 Radio icon Casey Kasem, best known for his role as the host of the American Top 40 music countdown franchise, has died at the age of 82. (Via Flickr / Alan Light)

The radio star's daughter, Kerri Kasem, broke the news of her father's death Sunday morning via Twitter, writing: "Early this Father’s Day morning, our dad Casey Kasem passed away surrounded by family and friends. ... we are heartbroken. Thank you for all your love, support and prayers. The world will miss Casey Kasem, an incredible talent and humanitarian; we will miss our Dad."

In the final years of his life, Kasem reportedly suffered from Lewy body disease, a common cause of dementia.

That directive read in part, “If the extension of my life would result in a mere biological existence, devoid of cognitive function, with no reasonable hope for normal functioning, then I do not desire any form of life sustaining procedures, including nutrition and hydration.” (Via Los Angeles Times)

Kasem’s second wife, Jean, was furious after the decision, saying:

Kasem and his family have made headlines in recent months for an alleged dispute between Kasem's children and his wife. The children allege Kasem's wife has kept them from seeing their father, and both have fought for conservatorship of Kasem and his estate. (Via CNN, ABC)

Aside from being the original host of American Top 40 countdown, Kasem was also an actor, providing the voices for several cartoon characters, commercial narration and — at one point — the promo voice for NBC.

His most notable voice-acting role was, of course, the voice of Shaggy in the Scooby-Doo franchise. (Via Hanna-Barbera Productions / CBS)

We thought we'd let Kasem sign off with the inspiring words he used during his years as a radio host.

"Keep your feet on the ground and keep reaching for the stars." (Via American Top 40)