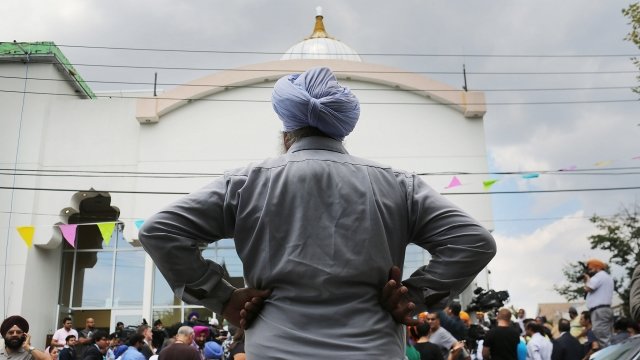 Gurbir Grewal became the country's first Sikh state attorney general when he took office earlier this year. On Twitter, Grewal said: "I'm a Sikh American. I have 3 daughters. And yesterday, I told them to turn off the radio."

This isn't the first time that offensive comments have been directed at a Sikh-American politician. Hoboken, New Jersey's Sikh mayor — the first in the country — was the target of fliers that said, "Don't let terrorism take over our town."

There are an estimated 500,000 Sikhs living in the U.S. The more visible aspect of the Sikh religious identity is the turban, which both men and women can wear.

Sikhs have often been targets of racist comments, sometimes because people mistake them for being Muslim. In the first month after 9/11, the Sikh Coalition documented 300 cases of violence and discrimination throughout the country. Of anti-religious hate crimes, anti-Sikh bias accounts for less than 1 percent, according to the FBI. But the Sikh Coalition says the numbers are not accurate since hate crimes often go unreported.

WKXW, along with hosts Malloy and Judi Franco, has since apologized to the attorney general and South Asian-American community. Malloy said, "We try to do humor in our show every day with current commentary, and we try to brighten up people's days, and yesterday, in our attempt at humor on Wednesday, we failed at that."

The hosts will return Aug. 6.