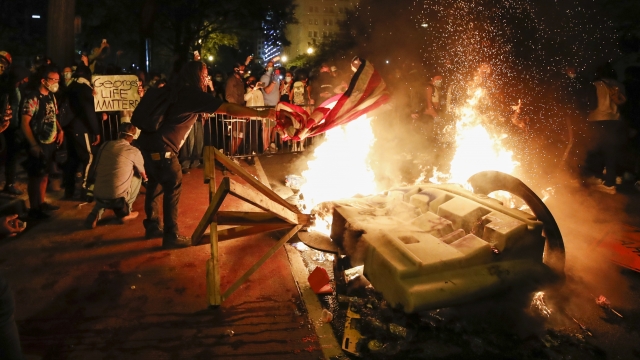 SMS
Who Is Sowing Chaos At The George Floyd Protests?
By Sasha Ingber
By Sasha Ingber
June 3, 2020
Authorities are pointing fingers at the far right and far left as domestic terrorism becomes more partisan in the United States.
SHOW TRANSCRIPT

Who is behind the violence and vandalism at the protests for George Floyd? The Trump administration has been quick to blame the far left.

"It's the violent Antifa radical militants that are coming out under cover of night, traveling across state lines, using military style tactics to burn down our cities," said National Security Adviser Robert O’Brien.

But analysts and authorities on the ground paint a far more complicated picture, and the FBI is appealing to the public for help.

"Violent extremism in the United States is hyper fluid. These groups overlap, interact, merge, splinter, emerge," said Bill Braniff, Director of the National Consortium for the Study of Terrorism and Responses to Terrorism at the University of Maryland.

Antifa, short for anti-fascist, started in 1960s Europe. Experts on extremism describe it as a non-hierarchical, loose group that often gets into skirmishes with neo-Nazis and white supremacists. After peaceful demonstrations escalated, President Donald Trump declared his intention to designate Antifa a terrorist organization.

"There are no domestic terrorist organizations identified by the U.S. government," Braniff says. "In terms of categorizing Antifa, most analysts don't describe them as terrorists in nature. They do not seem to be engaging in premeditated, violent attacks on symbolic targets, on civilian populations."

But other officials, like the mayor of Minneapolis where Floyd was killed in police custody, say far-right groups are sowing chaos.

"They believe, and this goes back to President Obama's election, that there's a white genocide afoot," Lecia Brooks, a spokesperson at the Southern Poverty Law Center, says.

The Boogaloo, originally a genre of Latin music and dance, is now a code word used by Hawaiian-shirt wearing, pro-gun activists calling for a second civil war. Members of the movement protested COVID-19 lockdowns, and in May, police charged one adherent in Texas with plotting to kill officers.

There’s also Identity Evropa, now rebranded as the American Identity Movement. Twitter recently told the media it suspended an account linked to the group, which posed as Antifa and promoted violence at the George Floyd protests. Founded by an Iraq war veteran, its followers chanted “Jews will not replace us” at the fatal Unite the Right Rally in Charlottesville in 2017.

"Over recent years, terrorism has become more partisan in the United States, where individuals have carried out acts of violence on behalf of one of the two political parties or candidates," Braniff says.

According to the Anti-Defamation League, 90 percent of extremist murders last year were linked to right-wing groups.

"The center is concerned about the distraction that the Trump administration has caused," Brooks says. "It's not about it's not about Antifa disrupting protesters. It's about the message of the protesters being able to get through."