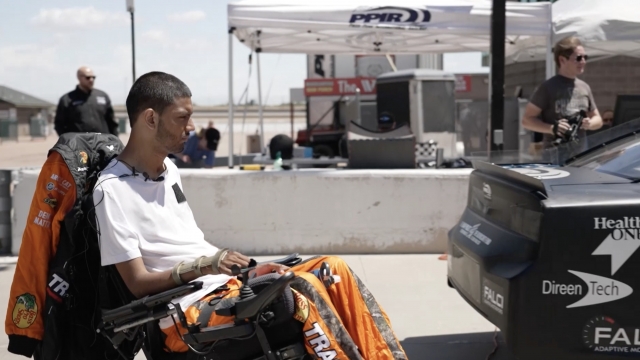 On a track in Colorado Springs, racing thoughts and motor function have deeper meaning.

Quadriplegic German Aldana Zuniga lost movement after a car accident when he was 16 years old.

Now, he's the first patient to drive with his brain.

He can pull out of pit row, punch the throttle and speed away using only his mind and technology.

It all started with a question in 2013. Spinal cord neurosurgeon Dr. Scott Falci wondered, “Could you modify a race car so people with spinal cord injuries can drive it?”

"A large portion of this population that I was dealing with had a love affair for automobiles, cars, motor sports," Dr. Falci said. "I want to get spinal cord injured patients and just mobility-impaired patients in a race car where they can drive it themselves and just for the fun and the motivation and the inspiration that it would provide."

It could also serve as a real time lab. Engineers developed a modified driving system, using data from rides to improve the tech.

States away the Miami Project to end paralysis had their own research question: Could an FDA approved brain device for Parkinson’s patients work for quadriplegics?

This is where Zuniga comes in. Miami Project doctors implanted that brain device in him and made a glove that connects with it.

Biomedical engineer Kevin Davis is part of the team.

“Whenever he’s thinking about moving his arm, we can detect a difference in the neural activity and that difference is what allows us to control external devices," Davis said.

The scientists joined forces with a new goal to combine both technologies.

"If we could harness the computational power of the brain, we could really take this quite far," Dr. Falci said.

How A Man With Quadriplegia Moved His Arm Again

Researchers call it the first study of its kind.

In the brain, that thought is a special signal with a unique electrical fingerprint. A part on the implanted device on top of his brain detects that signal and feeds it to computers in the car. Those computers are programmed to understand “open” and “look forward” and push the throttle and drive the car away.

Engineers swapped software code from Colorado to Florida while Zuniga drove a simulator for over a year. When it the time came for the real car:

"It’s not even close, its totally different," Zuniga said. "You see the track, how big it is, the noise of the car, the heat of it."

It’s the first time Zuniga has ever driven. He became a quadriplegic before he could get a driver’s license.

"Once you’re on the road, you feel the rush, the adrenaline," Zuniga said. "The track feels so short. I feel good, I feel fantastic, very happy."

The data from the track lab will go to improve the next ride, plus practical applications like controlling an electric wheelchair or an robotic prosthetic.

Dr. Falci is also researching how to restore spinal cord function with stem cells. It could bring back movement and feeling in the body.

"Regenerating the spinal cord, because that's the healthiest of all conditions," Dr. Falci said. "The more we can do for them or help them do on their own, the independence gained and the quality of life just goes up dramatically."

The road ahead for full restoration is a long one.

Dr. Falci has already spent 29 years working on it, but he’s not gassed.

No matter how many more trips around the track it may take, there’s one willing patient ready to propel forward.