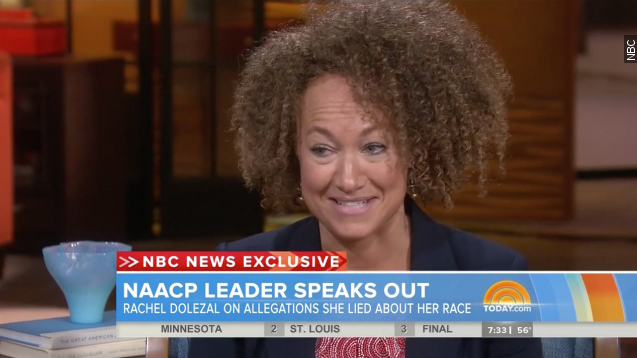 A day after stepping down as president of the Spokane, Washington's NAACP over questions about her racial identity, Rachel Dolezal sat down with "Today" host Matt Lauer.

Dolezal, who is Caucasian by birth, said that she has self-identified as black since she was 5 years old: "I was drawing self-portraits with the brown crayon instead of the peach crayon. That was how I was portraying myself," she said. "I identify as black."

But while Dolezal told Lauer her identity is more complex than just identifying as a different race, her adopted brother, Ezra Dolezal, spoke with "Fox & Friends" the same day saying the exact opposite.

Elisabeth Hasselbeck showed Ezra a clip from Rachel's "Today" interview and asked if there's truth to the complexity of race identity. He said: "I don't think there's anything really complex about what's true and what is not true. ... I think she's making it into a bigger issue."

The controversy over Dolezal's past has also called into question the validity of her job as an adjunct faculty member teaching Africana Studies at Eastern Washington University.

The city of Spokane is also investigating whether Dolezal violated any laws when filling out her application to serve as chairwoman on Spokane's Office of Police Ombudsman Commission. She self-identified as white, black and Native American on the application.