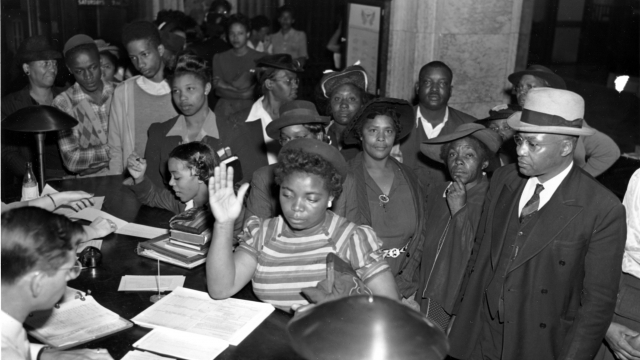 Millions of people across Georgia are lining up to cast their votes in two state runoff elections that will determine which party controls the U.S. Senate.

The reason these runoffs are even happening goes back to the 1960s during the Civil Rights Movement.

For decades the state of Georgia used a county unit system to determine the winner of its primary elections. The system, which allotted votes by county population, allowed counties with fewer residents to hold a majority of the unit votes. This restricted Black political influence by heavily favoring predominantly-White rural communities.

But in 1963, the U.S. Supreme Court rejected the county unit system, saying it violated the Equal Protection Clause of the Constitution.

That "one person, one vote" ruling forced Georgia's White politicians to come up with a new way of voting.

Some feared a plurality system would make it much easier for a Black candidate to win. They thought the state's Black population would vote as a single bloc for that candidate and deliver a victory, while White voters would be split amongst other candidates.

State Rep. Denmark Groover — who would later describe himself as "racially prejudiced" — came up with a proposal requiring an election's winner to receive over 50% of the vote. That proposal has been the law for more than 50 years.  And it's the reason voters are heading to the polls again.

Groover presented his runoff option as a way to "prevent the Negro bloc vote from controlling the elections."

He believed that even if a Black candidate made it to a second round of voting under runoff rules, White voters would band together, ensuring a White candidate won the race.

The Justice Department unsuccessfully challenged Georgia's majority-vote requirement in 1990, arguing the practice had "a demonstrably chilling effect on the ability of Blacks to become candidates for public office."

While Thurbert Baker became the first Black man to serve as Georgia's Attorney General in 1997, Georgia voters have yet to elect a Black candidate to other senior positions, including governor, lieutenant governor and U.S. senator.