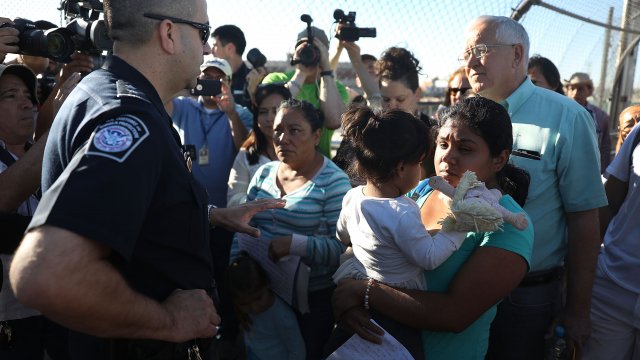 President Trump wants to shorten the time it takes to rule on asylum claims. But immigration judges say first, they need more hires and resources.

President Donald Trump issued a memo on Monday evening to instill major changes to the U.S. asylum process. Among other things, the directive aims to speed up the time it takes for immigration courts to rule on asylum claims to no more than 180 days.

That process can currently take years because of a notoriously huge backlog of immigration cases — which is quickly getting worse. At the time of writing, it stands at around 870,000 cases.

Reducing the backlog is, of course, an important and lofty goal. But in two interviews with Newsy, the head of the union that represents immigration judges said quotas and caps, like the 180-day rule, are not the right prescription.

"This 180-day rule, frankly, has been on the book for 20 years, and we have never really been able to beat it."

Ashley Tabaddor says processing new asylum cases in 180 days would be virtually impossible without hiring up to 1,000 additional judges and beefing up immigration courts. She says those additional resources are long overdue — especially when compared with the rapid expansion of immigration enforcement.

"Imagine a one-lane highway and one exit ramp, and you now double or triple the lanes and still keep the same exit ramp. You are going to have traffic, you're going to have this bottleneck. And that's where we find ourselves, is that for years and years of neglect, we have not had the budgeting.

"It's not only an issue of hiring a judge. When a judge gets hired, there needs to be a team — a support team also hired with that judge. So you need to have the courtroom space, the office, that file space, then you need the technological support."

To be fair, the administration has hired around 120 judges over the past two years. There are now around 430 immigration judges, and 20 more should be added soon. But the hiring process can be long and tedious. And President Trump has said in the past that adding hundreds — if not thousands — of immigration judges is unrealistic and unwanted.

"I don't want judges; I want border security. I don't want to try people, I don't want people coming in. ... Thousands and thousands of judges they want to hire. Who are these people? When we vet a single federal judge, it goes through a big process."

Last year, the administration introduced annual quotas for immigration judges. But so far, that hasn't worked in reducing the growing backlog. Most importantly, Tabaddor says the quotas — like the 180-day rule — could undermine the independence of the courts.

She said: "There's no independent judge in the nation that is put in a place where he or she has to worry about keeping their job if they don't produce a certain number of cases ... which in fact, make the backlog even worse and completely compromise the integrity of the court."

"That sounds counterintuitive, because it sounds like with quotas you're able to get through cases faster," said Newsy's Ben Schamisso.

Tabaddor said: "The parties will no longer have the same respect or same confidence in the court, which means that anytime the judge says, 'No, the case needs to go forward now,' or tells a witness to check, you know, stop talking about a certain area, the parties are going to start questioning whether the judge is doing that because the case requires it or that the judge is worried about trying to meet a certain deadline or is trying to squeeze in another case into that day."

"I think the biggest thing that the administration could do to decrease the amount of time it takes to adjudicate asylum applications would be to take asylum entirely out of the immigration court system."

Sarah Pierce of the Migration Policy Institute says the officers who do the initial credible-fear interviews with asylum-seekers at the border could complete asylum cases themselves instead of handing them to the overburdened immigration courts. This, she says, would allow legitimate asylum-seekers to be approved quicker and remove the incentive for those without a proper claim to seek the protection.

Tabaddor supports the idea of letting asylum officers adjudicate more cases on the basis that it would, indeed, be a more efficient system. But she says even then, more complicated cases would still need to be referred to immigration courts, since they are best equipped to deal with them.