Questions We Have About The New 'Star Wars' Trailer 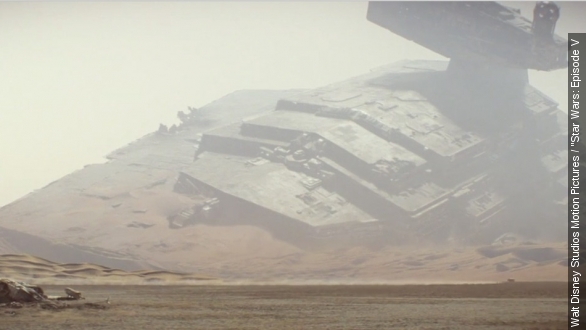 SMS
Questions We Have About The New 'Star Wars' Trailer
By Kate Grumke
By Kate Grumke
April 16, 2015
The newest trailer for "Star Wars: Episode VII - The Force Awakens" was pretty awesome, but it left us with a lot of questions.
SHOW TRANSCRIPT

The second "Star Wars: The Force Awakens" teaser was released at the "Star Wars" celebration in Anaheim, California, Thursday — and it was WAY cooler than the first one.

But spoiler alert: We're about to give away everything in the trailer, so watch that first!

It opens with that beautifully familiar John Williams melody as we see a crashed Star Destroyer on the planet of Jakku; J.J. Abrams made sure to say it's not Tatooine, guys. Duh.

And die-hard fans only got more references to the original trilogy as the trailer went along.

"The force is strong in my family. My father had it, I have it, my sister has it..." said Luke Skywalker played by Mark Hamill.

"You have that power too," the narrator in the trailer said.

In the end, this trailer left us with more questions than answers.

Like who is Luke talking to? Who is taking this lightsaber? Is that a new Skywalker?

What's this flag these other stormtroopers are standing in front of?

Why are Tie Fighters attacking stormtroopers?

And thanks for answering our question about the Millennium Falcon from the first teaser.

But where is everyone else? C3PO? Leia?

And especially, why is everyone still fighting? Were all those ewoks dancing for nothing?

We'll get all the answers to our questions Dec. 18. And man, eight months and two days feels like a long time.