There Was One Clear Concern In Peter Strzok's Hearing: Bias 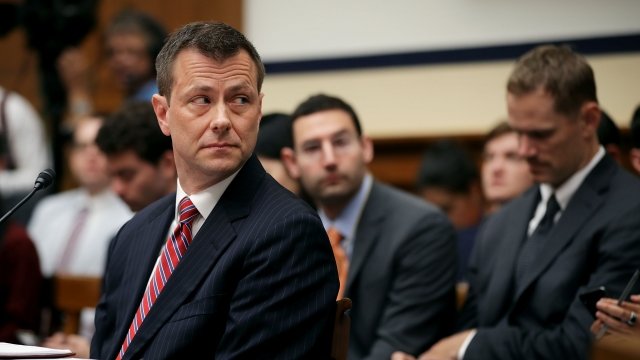 FBI agent Peter Strzok testified before Congress for more than eight hours Thursday. And political bias was a key point of disagreement.

"But let me be clear unequivocally and under oath: Not once in my 26 years of defending our nation did my personal opinions impact any official action I took," Strzok said.

"But I don't appreciate what was originally said being changed," Strzok said.

"I don't give a damn what you appreciate, agent Strzok. I don't appreciate having an FBI agent with an unprecedented level of animus working on two major investigations during 2016," Rep. Trey Gowdy said.

"At no time in any of those texts did those personal beliefs ever enter into the realm of any action I took," Strzok said.

"There is a very big difference between someone expressing his or her political views generally and someone leading an FBI investigation making highly negative and explosive comments about the actual target of that investigation. ... Your assertion that your statements do not constitute bias is, well, absurd," Rep. Karen Handel said.

Other lawmakers pointed to the DOJ inspector general's report as evidence of Strzok's purported bias.

That report did criticize Strzok and his fellow FBI employee Lisa Page for sharing personal and political feelings on their government-owned cellphones. It said those messages raised concerns about the appearance of political bias. But the report also said political bias did not impact the FBI's investigation into Hillary Clinton's emails.