Queen Made 'Greased Brakes' Remark At News Of Diana's Crash 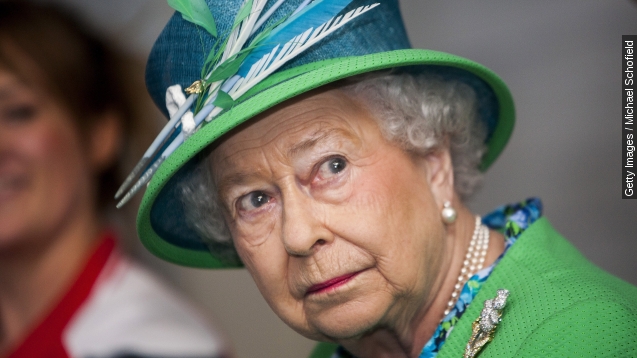 SMS
Queen Made 'Greased Brakes' Remark At News Of Diana's Crash
By Cliff Judy
By Cliff Judy
August 15, 2015
After learning of Princess Diana's car crash, a new book says Queen Elizabeth mused, "Someone must have greased the brakes."
SHOW TRANSCRIPT

Following the news that Princess Diana had been in a car crash, Queen Elizabeth gave what the author of a new royals biography called an "astonishing remark."

A source for the new book says the Queen — not yet knowing the severity of the accident that killed her daughter-in-law — said, "Someone must have greased the brakes." (Video via ITN)

Ingrid Seward is the author of "The Queen’s Speech: An Intimate Portrait of the Queen in Her Own Words," scheduled to be published at the end of the month.

In excerpts printed by the Daily Mail, Seward wrote the greased brakes remark "reveals something of the extraordinary and complex relationship between her and Diana."

It'll probably do anything but pacify Diana enthusiasts. Despite her longtime separation and divorce from Prince Charles, the Princess of Wales was one of the most beloved royals when her car crashed in an underground tunnel in Paris in 1997.

"Within the last few moments, the press association in Britain — citing unnamed British sources — has reported that Diana Princess of Wales has died," BBC's anchor said the night of Diana's death.

After getting over the shock of Diana's death, Seward says the queen's first thought was on Princes William and Harry.

"She wanted the family to stay in Scotland to give her grandsons a chance to absorb the shock of their mother’s death as far as possible from the public eye."