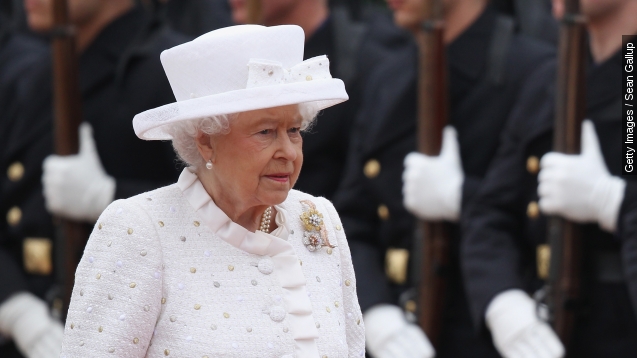 On Sept. 9, 2015, Queen Elizabeth II became Britain's longest-reigning monarch, surpassing her great-great-grandmother, Queen Victoria — who was also the only other British monarch to celebrate a Diamond Jubilee. That's 60 years.

Really cool record to set, right? That means the queen has seen a lot in her day.

Queen Elizabeth II is only the 40th monarch since William the Conqueror was crowned King of England in 1066. (Video via The British Monarchy)

She has reigned for a time spanning 12 Prime Ministers and 12 U.S. Presidents. That's a long time, obviously.

For perspective, Tony Blair was born one month before her coronation. He served as Britain's Prime Minister from 1997-2007.

She's also patron of over 600 charities and organizations. That's a lot of multitasking.

Queen Elizabeth is considered the first head of state to send an email. She sent the first one on March 26, 1976.

There have been seven – yes, seven – popes during her reign.

There have been over 129 official portraits commissioned of the queen, one of which is the first (and only) hologram portrait of her.

Her majesty celebrated the first diamond wedding anniversary of a reigning British monarch. She and the Duke of Edinburgh have been married almost 68 years.

And 237 streets have been named after the queen.

She's also stayed hip — as if that was even in question — by creating a new designer dog breed. The dorgi is a corgi-dachschund mix. Ah-dorable. (Video via Greenfield Puppies)

The queen is the first royal to be awarded a gold disc from the recording industry. CDs from her 2002 Golden Jubilee Party at the Palace sold over 100,000 copies in the first week.

She has two birthdays — one celebrated in June in the United Kingdom and the other, her actual birthday, on April 21.

Ah, to live the life of royalty.