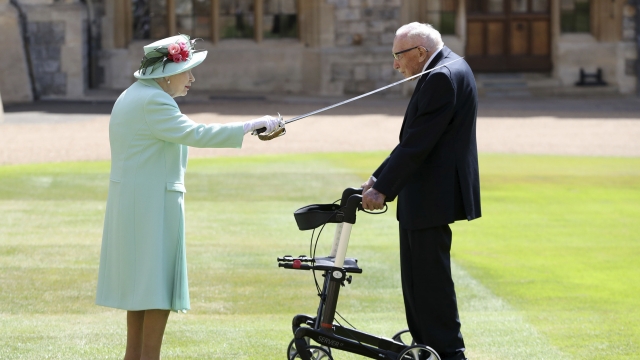 SMS
100-Year-Old Knighted After Raising $40M For U.K. Health Service
By Shira Tarlo
By Shira Tarlo
July 17, 2020
Under coronavirus lockdown, Moore raised millions by doing laps in his garden and inspired others around the world to make a difference by walking.
SHOW TRANSCRIPT

The British veteran who raised over $40 million for the U.K's National Health Service was knighted by Queen Elizabeth.

Capt. Tom Moore raised the money by walking the length of his garden 100 times during the coronavirus lockdown. His original goal: $1,200 by his 100th birthday.

As Moore's campaign went viral, donations flowed in from around the world.

Friday's ceremony was the queen's first public appearance in months.

The royal has been self-isolating at Windsor Castle since March due the pandemic.

Ahead of the event, Moore said he was "overwhelmed" by the chance to meet the queen.

"It isn't everybody who gets the chance to see the queen, is it? I think that's going to be absolutely marvelous for me," said the captain.

Moore joked about having to kneel.

Moore has inspired people of all ages to raise funds by walking, including a 9-year-old with cerebral palsy and autism.

"Let's take the selflessness and the love of the health and the care workers and the charities, the public spirit and the good humor of the entire population. And let's brew them together with the superhuman energy of Captain Tom, bounding around his garden at the age of 100 and raising millions for charity," Johnson said during a press conference last month.