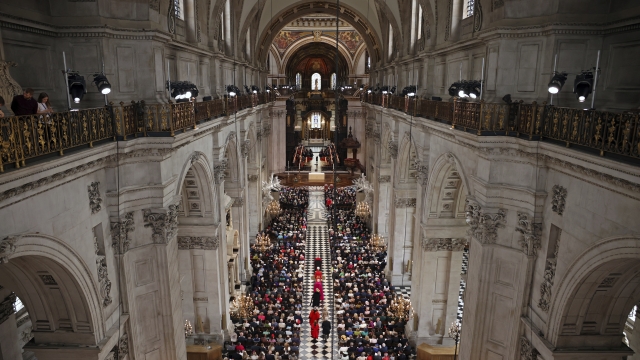 A service of thanksgiving at St. Paul's Cathedral is without the person whose long years of service thanks were being offered.

Queen Elizabeth II was absent but other members of her family were present.

Among them, the Duke and Duchess of Sussex, appearing together in public for the first time in Britain since they withdrew from royal life and moved California 2 years ago.

There have been well documented tensions since then and sharp comments in interviews but this was a day to come together.

With the queen absent, it was the Duke and Duchess of Cambridge, and the Prince of Wales and the Duchess of Cornwall, who led the thanksgiving for Her Reign.

The queen has a deep religious faith and the service would have been one of her highest for the weekend. It was at short notice that she pulled out — and it left a real sense to have the queen, the focal point of the service, no longer attending.

The decision to pull out was apparently made with "great reluctance" after considering the "journey and activity required," Buckingham Palace said.

"We booked our tickets a long time ago," U.K. resident Amanda Webster Lousie Markham said. "We didn't realize she wasn't going to be here."

NEWSY'S LUKE HANRAHAN: Are you sad that she's not here?

"It's a bit disappointing, but then again, at 96 years of age you're entitled to a day off every now again, don't you think? I do, yes. She's done well for 70 years. Never let us down once," U.K. resident Michael Smith said.

"It was really nice to see her yesterday, I guess it was a long day. It would have been nice to see her today, but obviously, her health is more important," U.K. resident Anca Filip said.

With senior royals — like Kate and William — on standby this weekend to take over at official events, millions of Brits will be crossing their fingers the queen is healthy enough to attend Saturday's main event to watch a famous horse race — "The Derby" at Epsom Downs Racecourse in Surrey.