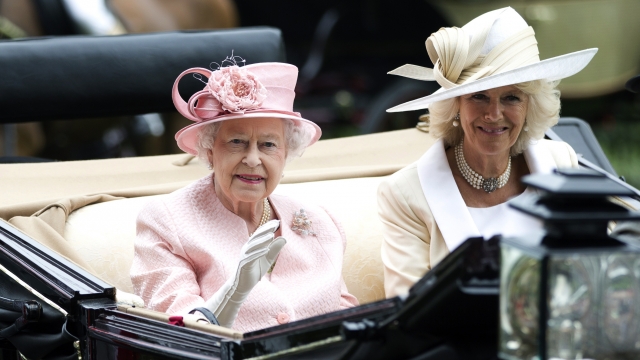 As the United Kingdom marked the 70th anniversary of Queen Elizabeth II's rule on Sunday, the queen looked to the future of the monarchy.

In remarks delivered in time for Sunday morning's front pages, the queen expressed a "sincere wish'' that Prince Charles' wife, Camilla, should be known as "Queen Consort" when her son succeeds her as expected. With those words the monarch sought to answer once and for all questions about the status of Camilla, who was initially shunned by fans of the late Princess Diana, Charles' first wife.

"The queen is such a realist and, you know, she's got a business to run,'' historian Robert Lacey said. "Well, they call it 'The Firm,' don't they? And this really brings Camilla into the firm properly now and for the future."

It took years for many in Britain to forgive Charles, whose admitted infidelity and long-time links to Camilla torpedoed his marriage to Diana. The popular, glamorous princess died in a Paris car crash in 1997, five years after the couple separated in a messy public split. But the public mood has softened since Charles married Camilla Parker Bowles in 2005.

Now known as the Duchess of Cornwall, the 74-year-old Camilla has taken on roles at more than 100 charities, focusing on a wide range of issues including promoting literacy, supporting victims of domestic violence and helping the elderly.

Her down-to-Earth style and sense of humor eventually won over many Britons. Her warmth softened Charles' stuffy image and made him appear more approachable, if not happier, as he cut ribbons, unveiled plaques and waited for his chance to reign.

Charles, 73, has long made it clear that he wants Camilla to be known as queen when he ultimately succeeds his mother on the throne. In his own message congratulating the queen on her long years of service, Charles thanked his mother for her support.

"We are deeply conscious of the honour represented by my mother's wish,'' they said. "As we have sought together to serve and support Her Majesty and the people of our communities, my darling wife has been my own steadfast support throughout.''

The queen's comments are remarkable in that they brought back memories of one of the lowest moments of her 70 years on the throne. The royal family was widely criticized for its initial silence in the aftermath of Diana's death, with one national newspaper proclaiming "Your People Are Suffering. Speak to Us Ma'am."

In backing Charles and Camilla, the queen remembered the support she received from her husband, Prince Philip, who died last year after decades at her side, as well as the role her mother played as the wife of a king.

"I am fortunate to have had the steadfast and loving support of my family. I was blessed that, in Prince Philip, I had a partner willing to carry out the role of consort and unselfishly make the sacrifices that go with it,″ she wrote. "It is a role I saw my own mother perform during my father's reign."

"And when, in the fullness of time, my son Charles becomes King, I know you will give him and his wife Camilla the same support that you have given me."

But for now, the queen remains at work.

On Sunday, Buckingham Palace released a photo of the monarch sitting in front of her official red dispatch box with government papers spread out before her.

The 95-year-old monarch is expected to spend the day at Sandringham, the country estate in Norfolk where her father, King George VI, died suddenly on Feb. 6, 1952, making her queen.

"It is a sad day and one that reminds her of the close relationship she had with him," said Lacey, the historical consultant to the Netflix series "The Crown.''

"(Sunday) is a day when, by tradition, she likes to go back to Sandringham, the country roots of the family,'' he told The Associated Press. "He liked to consider himself the Squire of Sandringham, the King of Britain, but he'd go out and walk the fields, shoot the game. That's what she remembers.''

While Sunday's anniversary is expected to be a low-key, public celebrations of the monarch's platinum jubilee are scheduled for June, when the weather improves. The festivities will include a military parade, neighborhood parties and a competition to create a new dessert — a mini extravaganza that will take place over a special four-day weekend June 2-5.

The celebrations are meant to recognize the woman who became a symbol of stability for the U.K. as it navigated an age of uncertainty.

Britain's longest-serving monarch, the only sovereign most Britons have ever known, she has been a constant presence as Britain navigated the end of empire, the swinging '60s, the labor strife of the 1980s, international terrorism, Brexit and the COVID-19 pandemic.

In her message, the queen promised to keep working for the U.K. and the Commonwealth.

"As we mark this anniversary, it gives me pleasure to renew to you the pledge I gave in 1947 that my life will always be devoted to your service,'' she wrote.