Queen Approves Suspension Of Parliament Ahead Of Brexit Date 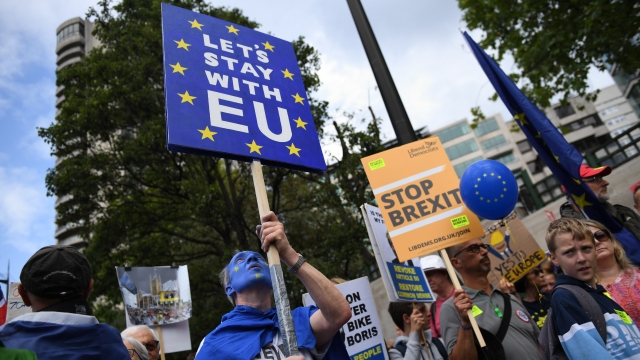 SMS
Queen Approves Suspension Of Parliament Ahead Of Brexit Date
By LeeAnne Lowry
By LeeAnne Lowry
August 28, 2019
Prime Minister Boris Johnson asked the queen to suspend Parliament for a month. Now lawmakers will only have about a week to discuss Brexit.
SHOW TRANSCRIPT

Queen Elizabeth II has approved a request from Prime Minister Boris Johnson to suspend parliament for a month ahead of her speech. The Queen's Speech, which marks the beginning of a new parliamentary session, is scheduled for Oct. 14. Parliament will shut down by Sept. 12. The shutdown leaves little time for lawmakers to discuss Brexit before the Oct. 31 deadline, and could make it more difficult for lawmakers to block a no-deal Brexit.

It isn't abnormal for a new government to shut down Parliament in order to hold a Queen's Speech. What is abnormal is the length of the shutdown — which typically would last anywhere from a few days to less than two weeks.

And, the timing is more controversial than other shutdowns. Members of Parliament return from their summer break on Sept. 3. That means lawmakers will have about a week to discuss Brexit before the shutdown.

In a letter to Parliament on Wednesday, Johnson said he made the decision because the current session has lasted 340 days — the longest session in almost 400 years.

Liberal Democrat party leader Jo Swinson responded on Twitter: "By suspending Parliament to force through a No Deal, Boris Johnson and the Government would remove the voice of the people. It is a dangerous and unacceptable course of action which the [Liberal Democrats] will strongly oppose."