Quapaw Nation Aims To Clean Up One Oklahoma Town 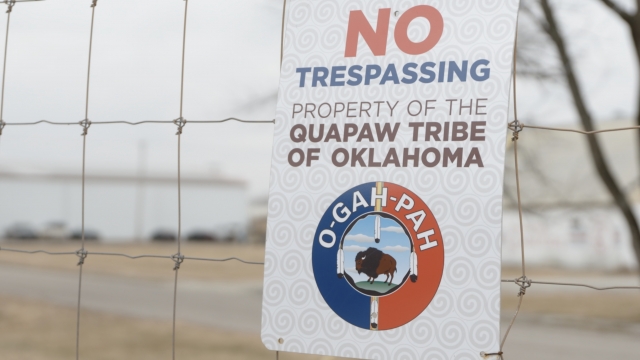 The northeastern part of Oklahoma is home to eight federally recognized tribal nations, including the Quapaw. It's also where one of the largest mining booms in the country took place.

That's where Picher sits — a once tight-knit community, including miners who were known as gorillas.

It was originally Quapaw land; they were forcibly removed from Arkansas to there in the early 1800s. Nearly six decades later, large deposits of zinc and lead were discovered, displacing many from their land.

Today, Picher has the distinction of being the site of one of the biggest cleanups of hazardous materials in the U.S. But it's still home to Henry Ellick. He and his wife raised their family there, and they didn't want to leave, even though it was polluted.

Ellick's ties to the land there run as deep as any Quapaw's, like secretary treasurer Guy Barker. His family's land in Picher is called Blue Goose. It used to be owned by Barker’s great-great-grandmother. Now it's in the middle of what’s known as the Tar Creek Superfund Site.

Barker’s family has a history here.

His great-grandfather, Victor Griffin, was the chief of the tribe at the height of the mining boom.

"You know, my great grandfather, who was Guy Barker the first, worked in the mines most of his life, died early from silicosis, which would be kind of in this area, would have been their version of black lung," Barker said.

Mines in Picher yielded materials for the tanks and machine guns for soldiers in both World Wars.

The mining boom ended in the 1970s. Families living there were forced to take a buyout because the town was deemed too dangerous to live in.

Henry Ellick and his wife were bought out after it was determined that their house was in danger of collapsing because of all the mining.

"We didn't know if it was going to be ongoing," Ellick said. "What if you didn't take the buyout? Could you live there?"

High levels of lead were found in the drinking water. In 1994, the Indian Health Service told the EPA that 34% of Quapaw children in the area had lead concentration levels in their bloodstream above the federal limit.

"I mean, trace amounts of lead within drinking water, groundwater, it's also on the air," Barker said. "It's blowing around, it's in the ground soils, in the sandbox that the kids are playing in, I mean, it's everywhere. And so I think in terms of federal government's response it was extraordinarily delayed."

Now, Barker and Quapaw Nation's environmental director Craig Kreman are managing the cleanup on the reservation.

In 2012, they were awarded a multi-million-dollar contract from the Environmental Protection Agency to remove the large piles of chat — the byproduct of mining waste that dots the landscape in Picher and the nearby towns of Cardin and Zincville — and rehabilitate some of the land.

Nearly a decade after that contract was awarded, Quapaw Nation has even more control over the cleanup. In July of 2020, a major decision by the U.S. Supreme Court came down in McGirt v. Oklahoma, which reaffirmed the Muscogee Nation's reservation. The ruling subsequently applied to five more tribal nations, including the Quapaw. The ruling was a win for tribal sovereignty, giving the Quapaw more control over their criminal justice system. The decision also has implications for the tribal nation's environmental regulations.

"And with McGirt and you know, now Lawhorn with Quapaws, we're really looking at different programs the tribe can take on and take on that capacity," Kreman said.

Kreman is talking about the tribal nation's ability to regulate companies that do cleanup work within their boundaries — companies like Flintrock.

Kreman points to some runoff from their site that empties in a nearby creek. It's enforcement that could fall under McGirt.

"I think that's coming into question with McGirt," Kreman said. "What capacity does our environmental office and the tribe have to take on and enforce regulations?"

The creek is full of zinc- and lead-tainted water because of the large underground reservoirs that seep up after heavy rainfalls. It oxidizes the trees growing near the creek and runs into the nearby Neosho River, then to Grand Lake.

Barker says McGirt is a win with the potential impact the decision has on environmental regulation and the tribal nation actively managing a superfund site.

"We have dedicated scientists, engineers, geologists that work on this day in and day out," Barker said. "We're in a position of real knowledge to be able to kind of help steer this going forward, and if there ever is another environmental impact of similar scope or nature really would be really helpful."

This is their backyard, he says.

"It's really best that we be able to be in a position there to hold individual actors accountable so that we're not chasing our tail wasting time creating environmental harm to not just the area, but to its inhabitants," Barker said.

Quapaw Nation manages the environmental cleanup in partnership with the EPA, and they say it's probably going to take decades to get the land there into some usable form and remove the large chat piles. Plus, he's not sure the state of Oklahoma should or could be trusted with this effort.

Ultimately, Barker says it's about good stewardship of the land — something he says Quapaws are pretty familiar with.