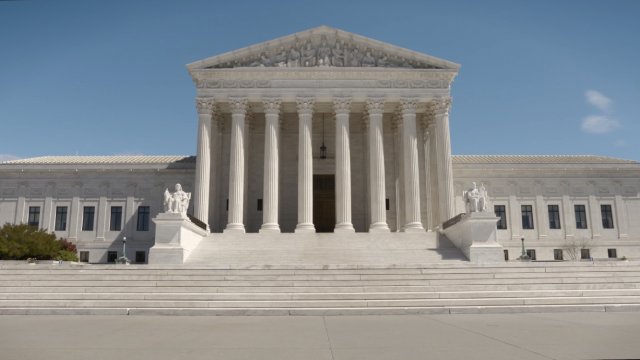 An obscure bit of legal doctrine has been getting a lot of attention lately: Qualified immunity.

Because police are rarely tried for crimes in these cases, critics of qualified immunity say the doctrine means police are not held accountable for their actions.

"If officers know they have immunity, they act with impunity," Ben Crump, attorney for George Floyd's family, told the House Judiciary Committee.

Defenders say abolishing qualified immunity would unduly punish officers who may make the wrong decision in the heat of the moment.

“By removing qualified immunity, what you're essentially doing is not allowing police to do their job,” said Kayleigh McEnany, White House press secretary.

Qualified immunity was created by courts, but now federal and state legislators are debating its future. What are the options?

“I would eliminate qualified immunity and put nothing in its place,” said Joanna Schwartz, professor of law at UCLA.

“I do know that qualified immunity is helpful,” said Sheriff Joe Pelle of Boulder County, Colorado.

“Allow individual officers to be liable in the same way that doctors are liable for malpractice,” said Frank Edwards, assistant professor at the Rutgers-Newark School of Criminal Justice.

We reached out to four people close to the issue to see what they think should be done about this hot-button topic.

“An officer is entitled to qualified immunity, meaning a damages case cannot proceed against them and for a civil rights violation even if they have violated the Constitution.”

She also said: “Ending qualified immunity is  the easiest, most impactful thing that Congress can do. The cases would turn on what should be the critical question in these cases, which is whether the officer exceeded his constitutional bounds as opposed to whether we can find a prior case with virtually identical facts.”

Pelle said, “I just think it's critically important that there is a standard that allows for peace officers to defend themselves when they're acting in good faith and in making split-second decisions.

“Bad times will be judged over a long period of time by many people in slow motion. … And so that's where it becomes difficult and tricky to insist that we're perfect.”

Schwartz said, “The Supreme Court's constitutional standards allow for officers to make reasonable mistakes. And so even without qualified immunity, officers can search the wrong home, can arrest the wrong person, can use force against someone who they say they thought had a gun when they had their phone in their hand. And so long as a mistake is reasonable, the Supreme Court's Fourth Amendment doctrine will shield them from liability.”

Some say the cost for bad behavior is falling on the wrong shoulders, meaning the taxpayers.

“Right now, when an officer deploys excessive force and an individual sues, they're suing the city. ... There's no reason the taxpayer should bear that burden, [it] should fall on the individual officers,” Edwards said.

One scholar says there’s already a model out there to curb misconduct.

“We then take a health care model. It's just like a physician who performs surgery who engages in malpractice. The premium goes up. The hospital says you're costing, costing us too much money, and you shouldn't be able to do surgery here. We can do law enforcement, police officers, the same way,” Ray said.

As lawmakers on Capitol Hill debate qualified immunity, Colorado has already made changes. Just last week, Gov. Jared Polis signed a police reform bill into law, allowing officers to be liable for up to $25,000 in civil damages in some circumstances.

“Part of the hope for the future is recruiting and retaining a diverse, educated, bright group of future peace officers. And we can legislate our way right out of that. We can make it a very undesirable profession, and that will do nothing to help the problem,” Pelle said.

“And if removing that protection prevents some officers from or some people from wanting the job. I don't know that that's a terrible thing,” Schwartz said.