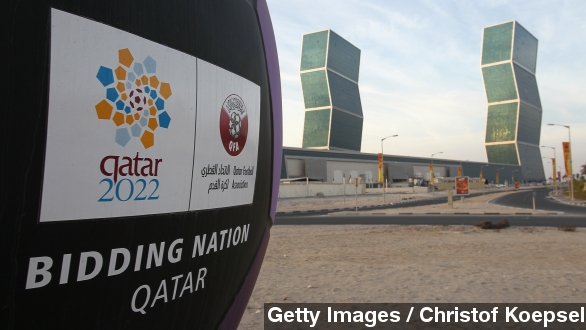 Don't expect to see the summer skyline in Qatar for the 2022 World Cup.

In a potentially historic decision, FIFA is now reportedly prepared to flip the calendar on the world's biggest soccer event because of extreme heat concerns.

Sports Illustrated soccer writer Grant Wahl is reporting multiple sources say a winter World Cup around November or December is a "done deal." FIFA's executive committee is set to meet in Zurich next month to make the decision final.

FIFA has been dogged with criticism since selecting the Middle Eastern nation for the 2022 World Cup more than four years ago.

While one of the richest per capita countries in the world gave an undeniably beautiful presentation, Qatar was almost immediately accused of corruption and essentially of buying the tournament. (Video via NTDTV)

Several media organizations have also looked into the large number of migrant worker deaths and alleged human rights abuses in Qatar as the country spends billions to build stadiums and other infrastructure for the games. (Video via The Guardian)

FIFA President Sepp Blatter addressed the human rights concerns in the fall of 2013.

"There is not one single doubt that the World Cup 2022 will be organized in Qatar," Blatter told reporters. (Video via SNTV)

And all that's to say nothing of holding World Cup games in a city where daytime summer temperatures can reach into the 120s, which is the actual reason FIFA is reportedly considering these changes.

Only six months after calling the Qatar decision "not reversible," Blatter admitted picking the country was a mistake because of heat concerns for players and fans.

The Big Lead noted while negotiating with leagues over schedules and switching dates on TV networks will hurt, "those battles will be less costly than moving the tournament away from Qatar would have been. Sad as it is, FIFA can probably weather the human rights concerns."