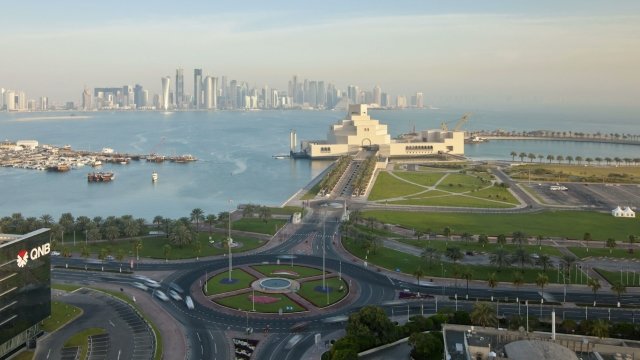 SMS
Qatar Gets 48 More Hours To Meet Neighboring Countries' Demands
By Kaveh Kardan
By Kaveh Kardan
July 3, 2017
Qatar has an extra 48 hours to accept the list of 13 demands from some of its neighboring nations in the Middle East.
SHOW TRANSCRIPT

Qatar has an extra 48 hours to meet the list of demands from some of its neighbors or face further sanctions.

The nation now has just a short time to meet 13 demands from Saudi Arabia, Egypt, Bahrain and the United Arab Emirates. But that likely won't happen.

Qatar's foreign minister says the list of demands was "meant to be rejected."

He also said the tactics taken by the nations are "reminiscent of the extreme and punitive conduct of 'bully' states that have historically resulted in war."

The demands came after at least seven countries ended diplomatic relations with Qatar over its alleged support of terrorist groups like Al-Qaeda and ISIS.

The demands include cutting ties with those terrorist groups, ending relations with Iran, closing a Turkish military base and shutting down news outlets funded by the country, like Al-Jazeera.

Because of the sanctions, Qatar has relied on Turkey and Iran for imports like food and other essentials.

U.S. Secretary of State Rex Tillerson urged the countries to work out their differences with a more "reasonable and actionable" list of demands.

Qatar is home to a large U.S. military base that's a main staging area in the fight against ISIS.