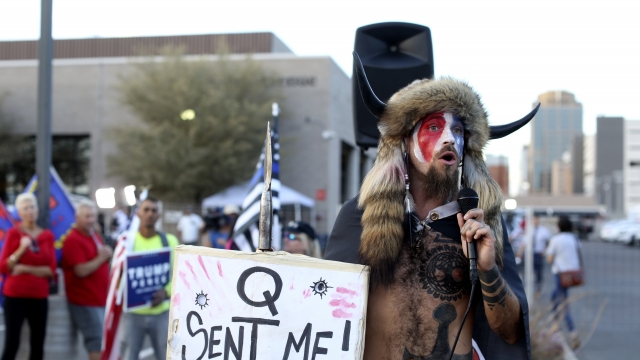 Q, the anonymous forum poster behind the QAnon conspiracy theory, went silent after Election Day and has not posted since.

QAnon holds wide-ranging beliefs, but the uniting view is that a group of Democrats and celebrities secretly control the government and are responsible for various evils, like abusing children. Q has long stated that President Donald Trump will eventually expose and arrest those involved.

“The central figure in QAnon is Trump, in that he's seen as this kind of leading hero who speaks in code and has a plan to overtake that this evil satanic cabal," said Sophie Bjork-James, assistant professor of the Practice in Anthropology at Vanderbilt University. “Every slip of the thumb on Twitter or a slip of the tongue in a press conference is interpreted as a message to the QAnon followers ... about this secret plan.”

But since President Trump was projected to lose the election, Q has not updated followers about where the theory stands. Q’s last post came on Election Day and featured an Abraham Lincoln quote about elections.

“A lot of the lead interpreters of Q are saying trust in the plan, or Q is being strategically silent, but he will come back. And so I think it really, this really comes down to does Q come back and in what form and the message that's shared, because for now there is some fracturing," Bjork-James said.

Some QAnon followers were agitated by the lack of updates from Q, especially as votes were being tallied.

Others noted that Q’s silence could mean either that the “the storm hits now” — a phrase used by QAnon followers to describe a judgment day led by President Trump against his opponents — or that “the plan failed.”

“There are some people who are panicking about ... feeling like maybe Trump did lose, feeling like they're searching for their leader to kind of guide them through what happens next.”

The lack of centralized QAnon activity opened the door for Q imposters to manipulate those messages, too.

"Someone took the last Q drop, which was made early on Election Day, and changed the subtitle in order to make this doctored Q drop, or forged Q drop, a call for violence," said Camille François, chief innovation officer at Graphika. "We haven't seen much traction on this content, which was primarily traveling in White supremacy channels.”

Moving forward, researchers don't expect that President Trump’s vacancy from the White House will stop the theory from developing, even if Q doesn’t return.

"We're in a really uncertain moment about the future of this conspiracy. President Trump is facing multiple lawsuits for a whole slew of issues, everything from rape to tax fraud," Bjork-James said. "And so when he leaves office, if he ends up being charged for some of these things, that actually is part of the story that QAnon has posed — that Trump is innocent, but people will try to go after him to protect this cabal. And so I think it would it it's already framing any attempt at prosecuting Trump as illegitimate, regardless of the evidence."