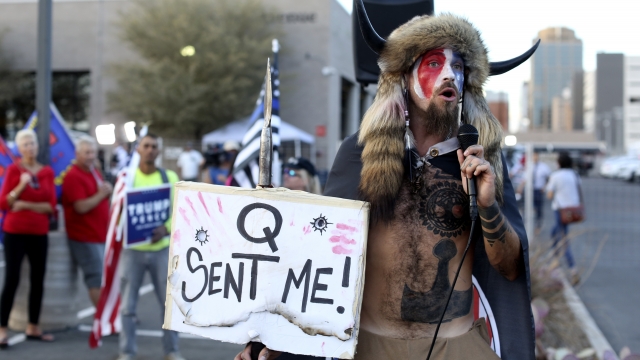 SMS
Ex-QAnon Follower: 'This Is How You Get Good People To Do Bad Things'
By Sasha Ingber
By Sasha Ingber
November 10, 2020
Jitarth Jadeja is warning about the dangers of the conspiracy theory, as followers believe the election was rigged to hurt President Trump.
SHOW TRANSCRIPT

"This is a battle between literally angels and demons. If you think the stakes are that high, you are willing to not just watch your enemy burn. You will be happy they are burning. This is how you get good people to do bad things."

Jitarth Jadeja is a 32-year-old ex-QAnon follower. He’s warning the world of the dangers of the conspiracy theory — as followers in the U.S. believe President Trump’s unproven claims that the election was rife with fraud.

"Criminal charges are expected against two men found with guns near the Pennsylvania convention center last night," a reporter said on local TV.

Police officers in Philadelphia last week arrested two men with firearms who were allegedly plotting to attack a vote counting center. Video footage of their Hummer shows a QAnon sticker. And a “Million MAGA march” planned in Washington, D.C., for the days ahead is likely to attract supporters.

"They take oaths of loyalty and they ask Donald Trump to quote-unquote 'activate' them because they are ready to do what is necessary. That’s a quote," Jadeja says.

The core tenet of QAnon: The president will take down a cabal of Satan-worshipping pedophiles who control business, entertainment and politics. It’s a fiction the president hasn’t rejected.

"What I do hear about it is they are very strongly against pedophilia, and I agree with that," President Trump said.

Following the first post on a message board in 2017, believers have been linked to arson, murder and kidnappings. The FBI has described it as a domestic terrorism threat.

"They are not going to give up what they see as this fight against evil just because Trump happens to lose an election which was 'totally rigged by the deep state,'" says Mike Rothschild, a conspiracy theory researcher.

Q, the purported official at the helm of the cult, hasn’t posted anything since Election Day. But come January, at least two people who have supported QAnon will have seats in the House.

"If a few of these Q-believing members of Congress end up being really visible, then I think we could have a real recruitment problem," Rothschild says.

QAnon has spread to other countries, like France, Germany and Australia. For Jadeja, it started by listening to conspiracy theorist Alex Jones.

"Test for the new world order, test for the post-human future," Jones said at a post-Election Day rally in Arizona.

The one and a half years of following QAnon changed his life — bringing anxiety and ending friendships. He also recruited his father.

"He's still into it at the moment. There's a lot of pent-up guilt," Jadeja says.

Jadeja broke away last year, he says, after receiving help for previously undiagnosed bipolar II disorder and ADHD. He says he started being more social and he started to see cracks in Q.

"I thought that if QAnon was real — and I thought he was real — that we could generally build a better future for all of humanity. It was a nice, simple answer to a very complex question," he says.