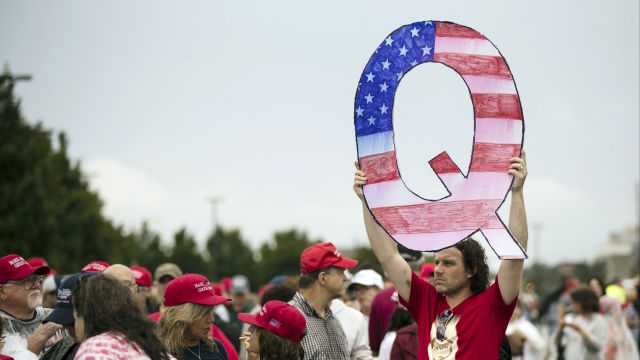 QAnon followers on have been talking about getting in on the trading action started by Reddit’s WallStreetBets….a disruption that rattled the stock market.

"The GameStop and the kind of Reddit populism of the traders was a real boon for QAnon folks," said Jack Bratich, Associate Professor of Journalism and Media Studies at Rutgers University, and author of “Conspiracy Panics: Political Rationality and Popular Culture."

The most recent frenzy is focused on silver trading. One Q influencer with 62,000 Telegram subscribers urged them to buy physical silver and create “a giant short squeeze that will make GameStop look like it’s a small world.”

"It's the silver people — they were more the radicals that were looking to topple the economy than to get rich quick," said Mike Rains, a QAnon researcher who uses the stage name to post frequent analyses about the conspiracy theory, and hosts the podcast "Adventures in Hellwqorld."

Another chain message circulated by QAnon followers urging them to buy physical silver to "instantly overnight collapse the banking system" had been viewed at least 270,000 times by Monday.

In a QAnon telegram chat with 21,000 subscribers, users told each other to purchase GameStop stocks and “hold the line,” noting “people from all over the world are buying GameStop to help America fight this evil.”

"They're constantly looking for the next way to connect their belief system to present day events," said Rains. "They're always looking for a way to tie QAnon into what's going on in the world right now."

QAnon interpreters dug up years-old posts from Q, an anonymous, central figure whose posts drove the movement  — and began linking them to the ongoing trade craze.

QAnon could stay attached to this trend for a while, as Reddit’s WallStreetBets antagonistic rhetoric toward Wall Street Bankers neatly aligns with QAnon’s.

"It can absorb something like this, which is a kind of a mediated collective action that was directed at elites — which is part of what QAnon has believed. They really saw a way to kind of stick it to the elites," Bratich said.