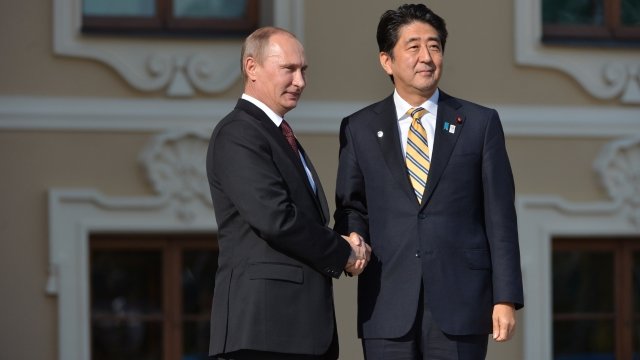 By Jake Jones
September 13, 2018
The islands have been a key roadblock for the two countries formally ending WWII hostilities.
SHOW TRANSCRIPT

Russia is reaching out to Japan in hopes of ending a dispute over four islands that dates back to World War II.

The two countries haven't formally ended the conflict due to disagreements on which country owns islands northeast of Japan – called the South Kuril Islands by Russia and the Northern Territories by Japan. The Soviet Union captured the four islands in the closing days of WWII, forcing all 17,000 Japanese residents to leave.

At an economic forum earlier this week, Russian President Vladimir Putin invited Japanese Prime Minister Shinzo Abe to discuss a peace deal "without any preconditions." Shortly after, a Japanese government spokesperson said the country's position had not changed and that all four islands belonged to Japan.

Putin's impromptu peace offer could be an attempt to improve economic relations with Japan and other Eastern countries in the face of Western sanctions. Russia faces U.S. and E.U. penalties for alleged election interference, alleged use of chemical weapons and the conflict in Ukraine.